Shanghai Masters: Something about the Far East seems to suit Novak Djokovic down to the ground, writes Marianne Bevis 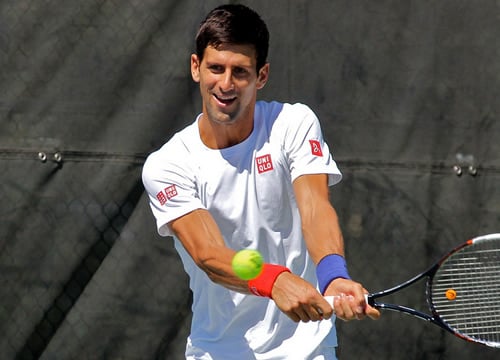 There is clearly something about the Far East that suits Novak Djokovic down to the ground.

For while he may have lost the No1 ranking to Rafael Nadal last week, he nevertheless beat his big rival in the final in Beijing—in straights sets, no less—to claim his fourth title there in the last five years. And Shanghai shines almost as brightly in the Serb’s record book.

In the four years that Shanghai has hosted this prestigious Masters tournament, Djokovic has reached at least the semi-finals in each of his visits. Having missed the event in 2011, he last year returned to take the title in a memorable three-and-a-half final over Andy Murray. And if that is not enough to prove his prowess in the soaring Qi Zhong stadium, he won the year-end finale on the same court in 2008, too.

So with two consecutive Beijing titles sandwiched by last year’s Shanghai trophy, Djokovic was enjoying a 15-0 winning streak in China—swiftly taken to 16 after a near whitewash of his first opponent, Marcel Granollers, 6-2, 6-0 in just 71 minutes.

But he made clear after his opening win that his ambitions extend well beyond the defence of his title in Shanghai.

For while he sealed his place at the ATP World Tour Finals in London some time ago, he is keen to defend the title he won there last year. And by doing that, he hopes also to keep alive his hopes for reclaiming the No1 ranking by the end of the year.

“There’s several tournaments left for me, this included, where I will try to go as far as I can [to] eventually have an opportunity to get back to No1. [But] it doesn’t depend only on me, it depends on Nadal…

“Now to build that confidence, try to [be more] aggressive on the court and get my game back to where it should be, that’s the primary focus.

“I can affect only what I can affect, and that is to play the best tennis that I possibly can in the moment and to try to take one tournament at a time.”

And beyond that London’s double-headed reward, he has another important ambition, too. Having led Serbia to the Davis Cup trophy in 2010—what he has since credited as the launch-pad for his record-breaking 2011 season—he hopes to do the same in this year’s final in November against defending champions, The Czech Republic.

“The Davis Cup is definitely one of the top priorities [before] the end of the year. For the team and for our nation, having an opportunity to win another Davis Cup title at home is a huge chance. God knows if we are going to have a generation this good and successful again.

“It’s a very unique and special feeling when you’re representing your country, it makes you very proud. That’s something that nobody can take away from you.”

And his hopes for a repeat of 2011 are clearly at the forefront of his 2014 ambitions, as he revealed before Shanghai got under way:

“I am aware of the fact that the 2011 season will be very difficult to repeat but knowing that I have done something like that, knowing that I’ve lost only a few matches in a whole year, gives me a lot of confidence and also belief that I can do it again.”

The next step in these many campaigns came in the shape of a man born just two days after Djokovic, the top Italian Fabio Fognini. Yet despite their closeness in age, it is only in the last year or so that the extrovert world No17 has burst into the upper ranks of the tour.

Fognini’s first final came in April 2012 in Bucharest and his second in St Petersburg last September. It was this year that he finally got on the honours board with a stunning post-Wimbledon clay run of 13 match-wins, taking the Stuttgart and Hamburg titles before losing to Tommy Robredo in the Umag final.

His successes took him from No68 last summer to No30 this summer to inside the top 20 by the start of the US Open Series, though he subsequently struggled to maintain his profile on the hard courts, winning just one match through that important American swing.

He did, however, recover some form in Beijing last week with wins over Robredo and Lleyton Hewitt, and took the first set from Nadal before losing in three. Not that the signs were too hopeful against Djokovic.

Fognini had lost all five of their previous matches, two of them this year—and the tennis that the Serb had played since his defeat in the final of the US Open had been little short of perfect. He dropped not a set in the Davis Cup semis and dropped only one in his Beijing run.

Fognini plays a lively, attacking style of tennis, but it proved to be the ideal foil to Djokovic’s incisive, consistent game. Not only is the Serb strong across the entire width of the baseline but he can turn offence into defence and back again with frightening ease—off both wings. In the fourth game, he brought up early break points after sealing a 29-shot rally with a volley winner and converted it to take a 3-1 lead.

The stats were eloquent: Djokovic had made just five winners but had also made only three errors, and dropped not a single point on his second serve. He was watertight, even against the all-court fire-power of Fognini.

The Italian kept up a high work-rate, and he had to. He faced a break point in the first game of the second set, faced four deuces in his second service game—a seven-minute marathon. Again he resisted, but the change of ends proved to be a pivotal moment. Fognini complained angrily to the umpire that Djokovic had not been warned for throwing his racket, and eventually got a warning of his own for abusive language.

Still seething, the Italian once again faced break points on his serve but this time, he could not resist the accurate, side-to-side bombardment from Djokovic. The errors came, and Fognini was broken.

By the time the Italian served to save the match, his heart and mind were clearly elsewhere, and a spate of errors handed an easy break and the match to Djokovic, 6-3. It was a weak end to what had been, for over and hour, a lively and high-quality contest that served, if nothing else, to prove just how grooved Djokovic looks.

In his 48th Masters quarter-final, the Serb will face Roger Federer’s conqueror, Gael Monfils, who also displayed his remarkable defensive athleticism against the Swiss man. But the Frenchman looked exhausted, as well as troubled by a sore foot, in the latter stages of that match, while Djokovic, who has won all eight of their pervious matches, looked barely out of breath when he left the Qi Zhong arena after a scant 70 minutes. He will be a hot favourite to win his 60th match of the season.

The Djokovic focus is clear and unwavering, and with No3 seed David Ferrer also beaten in his half, it’s hard to foresee anything other than a sixth meeting with the Spaniard who usurped his No1 spot last week. Djokovic will certainly fancy his chances.