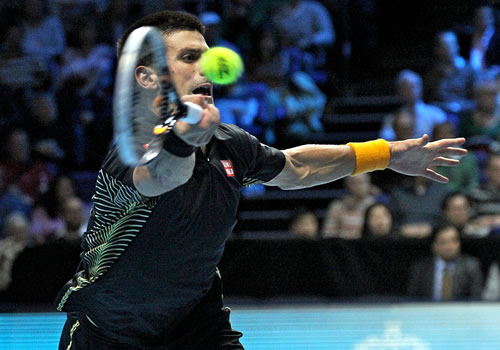 Something had to give. The two men who took to the magnificent Qi Zhong court in pursuit of the Shanghai Masters title both arrived unbeaten in this year’s Asian swing.

For the top seed, Novak Djokovic, Chinese soil was proving very comfortable indeed. Last week, he beat Rafael Nadal in Beijing to claim his fourth title there in the last five years. Meanwhile in Shanghai, he had reached at least the semi-finals in all three previous visits, winning the title last year, not to mention claiming the Masters Cup on the same court in 2008. One more win in Shanghai would bring his unbeaten run in China to 20.

Facing him was a man who had pressed him as hard as anyone other than Nadal in 2013. Juan Martin del Potro arrived in Shanghai on the back of the Tokyo title and played stunning tennis to beat Nadal in straight sets in the semis. And all that while carrying a heavy cold all week.

The chief concern for his fans was that very factor: He had played the evening semi, and played marginally longer, so came to the final with less recovery time than Djokovic.

But what was remarkable for Del Potro, the only man aside from Djokovic, Nadal, Roger Federer or Andy Murray to win a Grand Slam title since 2005, was that he had never won a Masters title. This was his third final, a third chance, to break the stranglehold of those same four men on the elite ATP tier of tennis: They owned 30 of the past 32 Masters titles.

The Serb led their head-to-head, 9-3—and 6-2 on hard courts—but in their three previous meetings in 2013, the story has been far from one-sided. At Indian Wells, Del Potro reached the final by beating both Murray and Djokovic, and then took the first set from Nadal before losing in three.

He sailed through to the Wimbledon semi-finals without dropping a set, beating David Ferrer in the process, and his match against Djokovic would become the most memorable of the tournament—a near-five-hour drama that showed Del Potro at his big-hitting best. Djokovic won, but both men knew Shanghai could provide a very significant denouement ahead of the ATP World Tour Finals.

Djokovic, no doubt aware of the import of their match, was clearly keen to douse the kind of fireworks that Del Potro produced against Nadal the previous day. Serving on the first point, he came to the net to open with a winner. He finished the game in similar style, and then turned his aggression on the Del Potro serve.

He defused the Argentine’s power with a drop shot on the very first point. Del Potro almost made a running forehand pass but, unlike his huge tally of such winners against Nadal, he just missed the line. He then double faulted having not done so in his entire semi-final. A couple of angled winners from Djokovic made an immediate break for a 2-0 lead.

The Del Potro forehand found a little rhythm in the third, and he earned two break back points, but Djokovic quickly defused the Argentine power with his off backhand down the line that time and again opened the court for a volley finish. He led 3-0.

Djokovic was treating Del Potro just as the Argentine had treated Nadal—hitting flat and fast from the baseline into alternating corners, waiting for an opening, and then firing off the winner. Del Potro appeared to have too little time to control his own ground-strokes—partly fatigue, perhaps, but also from the speed Djokovic was generating off Shanghai’s courts. Del Potro could make no impression, especially as his first serve found the box only half the time. Djokovic broke to love and then held with ease for a 5-0 lead.

Perhaps with a touch of irony, the stadium speakers blared out U2’s “I still haven’t found what I’m looking for”: It summed up the del Potro game thus far. And though he fought off two break points to finally get on the scoreboard, the set was quickly done, 6-1.

The opening game of the second set was a make-or-break moment for the Argentine. Twice he faced deuce, but there were signs at last that his forehand was finding its groove, and he sealed the game with his first two aces of the match.

Then a rather bizarre game from Djokovic saw the Serb apparently trip over his own feet twice, and combined with a couple of scorching winners from Del Potro, the match was turned on its head as the Argentine broke to lead 2-0.

Del Potro began to look more energised, and the crowd responded. The reversal continued, now Djokovic battling to hold on serve, then Del Potro holding to love. The Argentine even withstood the threat of 0-40 threat with some great forehands and serving, and levelled the match, 6-3.

The third set opened with two straights aces—from Djokovic—and that set the tone for what would become a compelling conclusion. Both men now played at a high level, both roared with each held game. Djokovic held off a first break point in the fifth game, Del Potro two in the next. The Argentine, though, began to look the more weary of the two, and when he faced 15-40 at 4-5, it looked all over.

But still he fought through, won four sizzling points, the last after one of the longest rallies of the match. The crowd went wild, and both men appealed to them for more.

It was only right that this should be decided by a tie-break, and at last the energy levels told. Djokovic was the stronger in their backhand exchanges, made a couple of winning forays to the net and twice beat Del Potro with drop shots. In the end, it was a speedy and decisive conclusion, 7-3, with Djokovic recording almost twice the winners, 47, to errors, and an impressive 18 points won at the net.

So Del Potro’s wait for a Masters title continues. For Djokovic, though, it marks a 15th Masters crown that takes him to a remarkable run of 20 wins on Chinese soil. It is also his 30th hard-court title, and marks a rare achievement by any player: back-to-back title defences in the space of a week.

It could not be a better platform as the Serb heads towards the defence of another title, the season’s climax in London. The following week, he hopes to lead Serbia to a second Davis Cup.

The New Year will bring his campaign to defend yet another big title, the Australian Open, and soon after all that, he will hope to claim back the No1 ranking that he lost to Nadal last week. With 10 titles and a mountain of points to defend during 2014, the Spaniard will have his work cut out—and that’s always supposing Djokovic doesn’t snatch back the top spot back before 2013 is done.