Shanghai Masters: Roger Federer and Novak Djokovic are battling it out for the world No1 spot in Shanghai this week 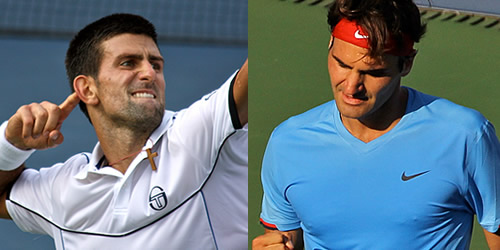 The competition for the prestigious No1 ranking entered a new phase as the top seeds, Roger Federer and Novak Djokovic, took to the courts of the Shanghai Masters this week.

Because, with the gradual convergence of the race to the end of the 2012 calendar year, led by Djokovic, and the rolling 12-month ATP rankings, headed by Federer, either could claim the No1 prize at the World Tour Finals in November.

When Federer entered into a ranking cabal with Rafael Nadal more than seven years ago, claiming No1 looked like a thankless task. They held the top two places to the exclusion of every other man from May 2005 to August 2009, and even then, one or other of them held sway as No1 for almost two more years.

One can only guess at the frustration for those hitting their head on the Federer-Nadal glass ceiling, a combined dominance of the No1 ranking, begun by Federer in early 2004, for an unbroken seven years and five months.

Novak Djokovic broke into the top three in 2007 but stayed under that invisible barrier for almost two years. The next summer saw Andy Murray join the quartet at No4 where, apart from a few excursions to No3—and even No2 for three weeks during 2009—he too was kept at arm’s length.

Then last year, Djokovic did not just break the glass ceiling but smashed it apart with an unprecedented run of seven straight titles. He beat Federer in the semis at Indian Wells to overtake him, and then targeted Nadal and No1. He took both by winning Wimbledon—and he did not stop there.

Djokovic won Montreal, reached the final in Cincinnati and—in one more assertion of his superiority—beat both Federer and Nadal to win the US Open. It took him 4,000 points clear of Nadal and 6,000 clear of Federer and, not surprisingly, he completed 2011 as year-end No1.

At the start of 2012, few expected a significant change in the new order. Certainly few thought Federer would be the one to challenge Djokovic for the top spot. Nadal, though, certainly could upset the Serb by winning back the clay titles he had lost through 2011. And he did just that, beating Djokovic in Monte Carlo, Rome and Roland Garros to close the gap to fewer than 1,800 points.

But the real story was unfolding at No3, where Federer had begun to eat away at the rankings gap even faster than Nadal.

It transpired that the loss by the Swiss man in the semis of last year’s US Open after holding match points had forced him to rethink and reschedule: “It was a tough loss…It was one that hurt. It was one that makes you wonder: How in the world can I end up losing this match? But to bounce back and not lose a match from that moment on I think shows how tough I am, the right decisions I can take.”

One of his decisions was to miss the Asian swing in order to recalibrate physically and mentally: “That was one of the reason why I did take some time off, to actually think it through, get into the right mental mindset.”

His pride, perhaps, had been dented by slipping to No3—even, for a few weeks, to No4. Perhaps he was also stung by the repeated mention of his age and his failure to win a Major since January 2010. Suffice to say, after his six-week post-US break, Federer went on a winning spree in Basel, Paris and London, reached the semis at the Australian Open, and then added the Rotterdam title.

The run of form carried him to titles in Dubai, Indian Wells and Madrid—and back to No2. Nadal’s clay success edged the Spaniard back to No2 in the run-up to Wimbledon, and that produced a Federer and Djokovic semifinal showdown.

Just as it had done 12 months before, the No1 ranking went to the Wimbledon champion, and this time it was Federer. He led Djokovic by just 75 points but that was enough to claim a particular ranking prize.

When Nadal had overtaken Federer at the 2010 French Open, the Swiss was one week shy of Pete Sampras’ record of 286 weeks at No1. Now he had reached 287.

In the months since, the competition at the top of the rankings has remained compelling. Nadal has been injured and Murray has gained points from the Wimbledon final, Olympic gold and his US Open title to take him above Nadal to No3. But his further ascent is blocked by the ongoing Federer-Djokovic battle.

The top two have also won titles and gained points, and though the ranking gap grew when Djokovic failed to defend his US title, the Serb held his lead in the race because of superior points from the start of 2012.

Then Djokovic’s win in Beijing last week gave the race a fresh intensity because it gave him the platform to overtake Federer in the rankings at Shanghai, and the Swiss had a new milestone in his sights: 300 weeks at No1. All Federer had to do was reach the quarter-finals…which may explain the tension in his normally clinical game when he took on compatriot Stanislas Wawrinka, a man he had routinely beaten in all but one of their dozen meetings.

In only two previous matches had Federer lost a set to Wawrinka, until this week. Making just two winners in the first set, and facing a break point at 4-4 in the second, it looked as though Federer may have to settle for 299 weeks, but once they headed into a tie-break, the odds turned in Federer’s favour. Never had he lost a tie-break to Wawrinka, and a sudden recovery of his form ensured he did not do so this time. Federer raced through the final set, 6-0, to guarantee his 300th week.

But what of the end-of-year No1? While Murray is, in theory, still in contention, it is Djokovic who looks favourite to claim the honours over the man he leads by 1,500 points, Federer—especially given the Serb’s form thus far in Shanghai.

He took just two hours to dismiss his first two opponents, and after beating the first, Grigor Dimitrov, he made clear his desire to end 2012 as top dog for his second straight year:

“The main objective it to try to get to No1 in the world and finish this year in this position.”

Federer, though less bullish about the end-of-year target, also made it clear that he hoped for more than 300 weeks:

“I mean, look, I hope I will finish world No1 at the end of the year …[though] if everything would have been totally focused on world No1, I would have gone to Tokyo or Beijing most likely…For me, I’ve already reached my goal by getting back to world No1 in the summer.” He neglecting to add that he had sounded close to missing the whole Asian swing after the Davis Cup in September, but overcame his weariness to make the long trip East.

Murray was rightly pragmatic about his short-term chances of claiming No1:

“I think getting to No1 in the world, that’s more a reward for playing very good tennis throughout the whole season…You need to focus more on the process and not so much just No1…I’ll try to do as well as I can between now and the end of the year. If I do that, there’s a possibility to possibly get to No1 next year.”

He has, thus far, been true to his word in defending his Shanghai title: He took just 57 minutes to beat world No20 Alexandr Dolgopolov.

But while the jostling continues for the kudos of the No1 ranking, there are also power-struggles just below the top. The likes of Tomas Berdych and Jo-Wilfried Tsonga are Nos6 and 8 in the race, separated by 600 points, and play one another in the quarters.

And amid the battles for rankings and points, there have also been stories of thriving 30-somethings. Tommy Haas, 34 and ranked No21 compared with 292 a year ago, has beaten Nos9 and 10, Janko Tipsarevic and Almagro, to face Djokovic in the quarters. Radek Stepanek, at 33, beat Nos12 and 14, Gasquet and Isner, to face Murray in the quarters. And of course at the top, 31-year-old Federer will most likely have to fend off both Murray and Djokovic to keep his hopes of the year-end No1 alive.

As Djokovic so rightly said after his first match in Shanghai: “I think this is one of the most interesting years in men’s tennis in the last decade.”