Shanghai Masters: Nadal wins, but Wawrinka will be back – and better 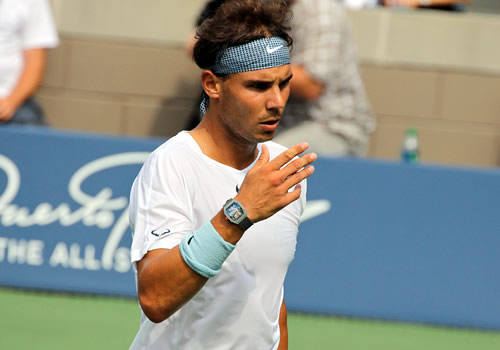 All four of the quarter-finals of this year’s Shanghai Masters were, on past records at least, one-sided affairs.

Jo-Wilfried Tsonga, ranked No9, played Florian Mayer, ranked 50 and the loser in all three of their previous matches. He was the loser again, 6-2, 6-3.

Then world No7 Juan Martin del Potro faced a man he had met only once before, No16 Nicolas Almagro, but the match had been as close as could be, a 7-6, 7-6 win for del Potro, only last week in Tokyo.

Then came two matches that, on statistics, weighed heavily in favour of the No1 and No2 men in the world.

The top seed and defending champion in Shanghai, Novak Djokovic, had beaten the charismatic Frenchman Gael Monfils in all eight previous matches, though several of them had been tough ones. But Djokovic’s victory in five sets at the US Open was back in 2005, while his victory in a final set tie-break in the final of the Paris Masters was in 2009. Since then, Monfils had been sidelined with injury so many times that his ranking was outside the top 100 at the start of this year. Now he was back to 42 and had a win against Roger Federer in the third round under his belt.

Sure enough, it proved to be far from straight-forward, and at times tetchy, up-and-down contest of two hours, 23 minutes that began with four straight breaks of serve.

First Djokovic, unsettled by his errors and poor serving, slammed down his racket, racket at the change of ends, but he held off a break point in the 10th game in a 25-shot rally, and they headed to a tie-break. Monfils, though, continued to serve the better to take the set, 7-4.

A sharp reverse in the second set saw Monfils broken in the first game as Djokovic produced some flawless tennis to hold the advantage. A fall, followed by a time warning, disrupted the tennis and Monfils, who complained and muttered through the rest of the set, finally suffering another break after a lengthy medical timeout, 6-2.

For a while, Monfils recovered his easy power to stay in contention and it unsettled Djokovic again: The Serb threw his racket to the ground, roared at his box, but avoided any warning. Another fall preluded a break of serve for Monfils, however, and Djokovic took the match, 6-4.

So far, then, the three match-ups preserved the status quo, keeping a big zero alongside the lower player’s name. And the last of the four ties suggested an even more pronounced discrepancy. The world No1, Rafael Nadal, took on the No8 Stanislas Wawrinka for the 11th time, and the Swiss man had never yet won a set, let alone a match.

But the Wawrinka of 2013 was a different animal, one of increasing maturity, growing strength, and improving tennis—and his burgeoning confidence received another boost after his third-round win over Milos Raonic: It took him past compatriot Federer in the race to London for the first time in his long career.

The Wawrinka surge, supported by a new coach, began at the start of the year in a remarkable fourth-round match against Djokovic at the Australian Open. Wawrinka lost, 12-10, in the fifth set but he later admitted it had done wonders for his self-belief, as did his victory over Andy Murray, for the loss of just three games, at the Monte Carlo Masters.

From there, it was victory in Oeiras and, in Madrid, his first Masters final since 2008. Along the way, he beat Tsonga and Tomas Berdych, and went on to reach his first Roland Garros quarter-final with victory over Richard Gasquet. The pinnacle came at the US Open with a semi-final finish following victory over Murray again, followed by another five-set loss to Djokovic, but that served only to spur him on.

Now with a career-best 47 match wins, seven of them over top-10 players, he belonged with the big boys, and had before him the prospect of his first-ever ATP World Tour Finals.

Wawrinka threw down the gauntlet in the opening game with a love hold in just 53 seconds. An ace and backhand down-the-line bullet showed just what he was capable of. But his next serve was considerably less easy.

The long opening rally was won with a running forehand lob by Nadal over Wawrinka’s head. The next was won with a forehand down the line, another by a running volley pickup winner to give the Spaniard two break points. Wawrinka saved them, showing just how much his movement and agility have improved since last year.

He saved another, persisting with the aggressive tactics that had brought such success against Murray in New York, and confidently held his next serve to love.

But these days, Nadal is also an aggressive, forward-moving player, helped by one of the most underestimated serves in tennis and backed by strong and secure overheads. He, like his opponent, backed up his serve with forehand winners from midcourt.

Their tennis drew the best out of each other in what could surely lay claim as the best set of tennis in the tournament. Even so, Wawrinka did not have a break point—until the every end. Nadal served at 5-6, and Wawrinka at last earned his chance with his signature shot, a cross-court winner from the finest single-handed backhand—indeed one of the finest of any backhand—in tennis. He was a point away from winning his first set against Nadal.

Naturally, the Spaniard responded with his own signature shot in a sequence of huge forehands, and although Wawrinka worked three more deuces through the eight-minute game, he could not seal the deal.

For the fans, though, it brought the perfect climax to the set, a 20-minute drama of a tie-break that began with a 5-3 lead to Nadal, went to 6-6 and then 9-9, each in turn holding set points. But at 10-10, Nadal threw in his first drop-shot of the match, angled and sliced off the forehand. It brought up one last set point, taken with a resounding serve, forehand, and volley winner by Nadal.

The winner count, evenly shared, was 39, the errors 22, with a total of 16 points won at the net. If there was any gap between them, it was consistency on serve: Wawrinka hit only 44 percent of his first deliveries, Nadal 67.

Could Wawrinka find any more than he had already? The first game of the second set suggested he might, earning two break points—more than in the entire first set—but he could not convert them, and the match suddenly ran away from him as what were formerly winning plays went just long or clipped the net.

Nadal went on a run of 20 points in the next 24, ending with a love hold and a 5-0 lead. Wawrinka had a glimmer of hope with one last break point as Nadal served for the set, the result of a terrific net exchange and one last 159kph backhand down the line. But the match, and the continued unbroken record, went to Nadal, 6-1.

The Spaniard goes on to meet Del Potro, while Djokovic will play Tsonga in the other semi, but Wawrinka, one suspects, will be buoyed up the set that got away. One look at the words tattooed on his arm will see to that: “Ever tried. Ever failed. No matter. Try again. Fail again. Fail Better.”

As he said after that five-set loss to Djokovic in New York:

“It’s how I see my life in general and my tennis career. Okay, today I lost again, but I’m back in the top 10 and I’m playing my best tennis. I just need to continue to practise hard. It’s simple in tennis. In general, it’s important you go back to work and you try to improve.”