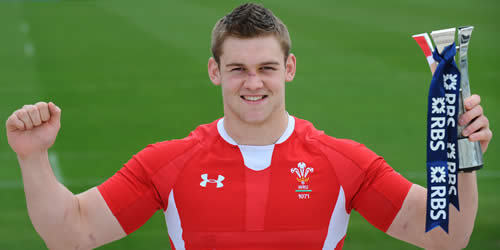 Flanker Dan Lydiate admits it’s already a year to remember after being named as the Six Nations player of the tournament following Wales’ Grand Slam triumph.

After collecting their fifth straight win of the competition against France at the Millennium Stadium, Warren Gatland’s squad dominated the shortlist with captain Sam Warburton, wing Alex Cuthbert and scrum-half Mike Philips nominated alongside Lydiate.

The shortlist was compiled of winners of the RBS Man of the Match award chosen by the host broadcasters from the first four weekends with the winner decided by a public vote, hosted on rbs6nations.com.

The 23-year-old was nominated for his performance in the win over Scotland and also received the honour for his stand-out performance against France on Saturday as Wales sealed their third Grand Slam in eight years.

“I am really surprised to be honest. I am genuinely chuffed to bits,” said Lydiate, who succeeds Andrea Masi in claiming the RBS Player of the Championship award.

“It tops off an amazing competition for me and for Wales. To be part of such a talented Wales team and win the Grand Slam in Cardiff on Saturday was incredible in itself but to then be voted Player of the Championship is absolutely unbelievable.

“It is a massive honour to win, especially given the quality of the other players up for the award. Thanks to everyone who voted for me, it means a lot.”