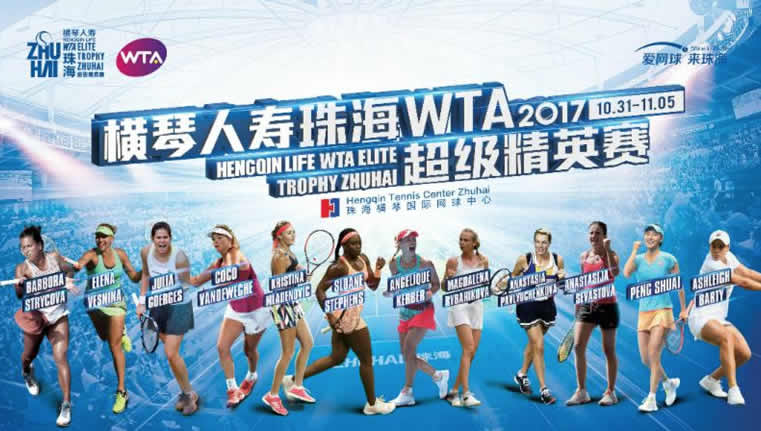 The line-up for the Zhuhai Elite Trophy Photo: WTA

US Open champion, Sloane Stephens, along with the super-consistent Kristina Mladenovic and two-time Major semi-finalist, Coco Vandeweghe, will headline a dozen of 2017’s best players in the prestigious Zhuhai Elite Trophy, the concluding main event of the WTA calendar.

The Hengqin Life WTA Elite Trophy is contested between the 11 highest-ranked women after the eight who have qualified for the BNP Paribas WTA Finals in Singapore, and the field of a dozen is completed by one wildcard. This year, that honour has been extended to home player, China’s Peng Shuai—though she only just missed the cut-off on ranking alone.

Not only is this new tournament—which has been played in the glamorous city of Zhuhai on just two previous occasions—rich in prize money, a cool $2.28 million, but offers players a points boost as they head into the off season, and also look towards the first Major of 2018 in Australia.

Little wonder, then, that only three women ranked between the qualifying nine and 19 are absent—all recovering from injury.

Tournament Director Jose Miguel Garcia said of the field: “After an amazing season of women’s tennis, all the players that have gained their spot to play in Zhuhai are amongst the best in the world. Great tennis is guaranteed for all the fans coming to Zhuhai and for everyone following from home all over the world.”

This year, the cut off for the elite 11 is an impressive No22 in the rankings, with only Johanna Konta, Svetlana Kuznetsova and Madison Keys missing with injury.

Former WTA Finals champions Dominika Cibulkova (2016), Agnieszka Radwanska (2015), and Petra Kvitova (2011) have not made the cut for either Singapore or Zhuhai.

Kvitova won in Zhuhai last year, while Venus Williams won the inaugural Elite Trophy in 2015, but this year the American competes among the top eight in Singapore.

Zhuhai: “The pearl of South China Sea” is located on the coast between Hong Kong and Macau. With a backdrop of hills and a frontage of sea and islands, it has been voted “The Most Liveable City of China” and “Foreigners’ Favourite Chinese City”.