Sochi 2014: More and more bobsleigh teams around the world get their athletes from the military or police 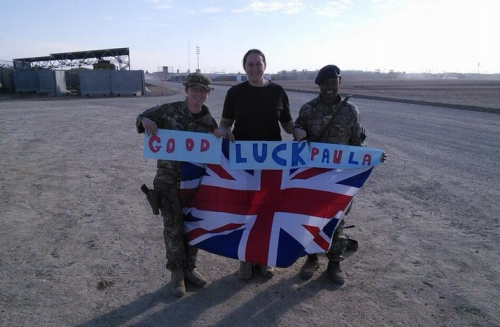 A lucky egg, dreadlocks and doubling up your thermals to stop any teeth chattering in sub-zero temperatures. Throw in a catchy reggae tune, and you have all the ingredients to compete in the Olympic bobsleigh, right?

Contrary to Hollywood legend, success in bobsleigh is determined by slightly more tactical expertise than the above magical Jamaican formula.

The bobsleigh world has evolved, and now coaches across the globe have found an effective base for recruitment – the military.

It’s not surprising really, the military-style operation required in getting a team set up for a Winter Games is well suited to the particular breed that compete, many of whom are soldiers away from the track.

From Europe to the US, bobsleigh scouts have realised that the traits evident in those who have undergone full-on military training are just what is needed to fulfil the tough demands on the ice.

Take Paula Walker, for instance. She is the British bobsleigh pilot and is also a corporal in the Royal Corps of Signals, a combat support arm.

When quizzed on the emerging trend for the new militant bobsled movement, she said of her peers: “First of all they’re always on time and the civilians that come into the military system turn into mini military people because they learn the way we work.

“I think the discipline within the team works out really well.”

Her boyfriend Sergeant John Jackson is a Royal Marine and their off-track personal and military partnership helped market bobsleigh to assist in aiming for an Olympic gold in Sochi after government funding was diverted away from the sport.

Lamin Deen has spoken about how a life in the military saved him from a life of crime and opened the door for sporting opportunities that would not have come his way otherwise.

“Fortunately I joined the military and they moulded me and turned me into the person I am today,” he told BBC sport.

“What makes bobsleigh so difficult is the unpredictability, in the military there are commands and procedures but when you’re out on the ice anything can happen.”

Germany, too has realised the potential those from the military can offer – of the 18 athletes selected for the bobsleigh squad, seven serve in the military, with most of the others recruited from the police force.

A lot of the disciplines are the same, you have to train hard for it. It requires a lot of strength, a lot of mental toughness – you are in this sled; no air bags, no seat belts, at 90mph

Such is the close relationship between the military and sporting community, the German army accepts athletes into their ranks, requiring them to only complete basic training so they can concentrate on developing their sporting talent.

America has a similar scheme called the US Army World Class Athlete Programme which has bred four Sochi bobsledders and two lugers from the US military, as well as three coaches.

“Team Night Train”, the US four-man defending Olympic champions are all from the military, and captain Christopher Fogt has spoken extensively about the advantage gained from this dynamic.

“A lot of the disciplines are the same, you have to train hard for it. It requires a lot of strength, a lot of mental toughness – you are in this sled; no air bags, no seat belts, at 90mph,” said Fogt.

“A lot of things that are brilliant in this sport are the camaraderie, the brotherhood that exists with the team – four full-grown men in spandex, hugging closely down the track, who travel Europe together for three months and room closely together.

“The army is the same kind of feeling. You feel very close, you fight for your teammates, not necessarily for the higher prize. You fight for the guy next to you.

“Obviously the army is slightly different, a little more serious, where you are trying to save their life, but here you are really trying to help your teammates and that’s a lot of the reason why bobsleigh as a team sport attracts a lot of army athletes.

“I don’t have a weapon, I don’t have the same access we had in Iraq. It’s a good change of pace for me going from that side where I knew everything and I could talk to people and I had a weapon on me to being a civilian.

“This is no war zone but not the safest environment. We kind of feel like something could happen so it is definitely been a transition for me to just relax and let things to happen.

Athletes in several other teams competing in bobsleigh also belong to the military, but the Korea team is not among them.

However, as soon as the games are over, four of the Korea men’s team must immediately present themselves for two years military service.

This new pattern of bobsleigh athlete may mean that chants of “I don’t know what I’ve been told” will soon drown out bobsleigh’s popular and long-time anthem “nuff people say, you know they can’t believe…”