Sochi 2014: Ice hockey quarter-finals, curling semi-finals, bobsled. Wednesday will have a distinctly 'team' feel to it after many solo events. 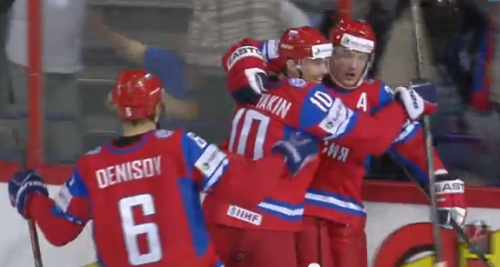 Team sports are taking centre stage as Sochi enters its autumn, with the home nation at fever pitch following their ice hockey side’s less than convincing progression to the quarter-finals.

The ice hockey quarter-final draw has been decided, and all four matches take place on Wednesday, as well as the semi-finals of both the men and women’s curling.

Russia are the second favourites to pick up gold in the ice hockey and face Finland in the quarter-finals as frontrunners Canada square up to Latvia, who sprung a surprise by beating Switzerland.

Sweden play European rivals Slovenia, while the USA team take on the Czech Republic in the final of the last-eight games.

Great Britain are through to both the men’s and women’s curling semis, following David Murdoch’s last-gasp two-point play for a narrow 6-5 win over Norway, with the men set to play Sweden and Canada standing in the way of the women and a guaranteed medal.

The Swiss women take on Sweden, while the other men’s semi-final is between Canada and China who repeat their round robin tie, in which Canada won by a narrow point.

After strong performances in the new team event, the ladies figure skaters competition is fierce, especially since the men raised the bar so highly in their individual event.

The short program starts on Wednesday, with the medals commencing on Thursday and defending champion Yuna Kim of Korea is priced at even money to regain her title.

With such a strong mixed team and with their skis now working better than in the warmer, stickier conditions of last week, Norway will be the probable winners of the mixed-biathlon event especially after Emil Hegle Svendsen thrilling win in a photo finish against the in-form Martin Fourcade in the men’s blue-riband 15km mass start.

Following their domination of the ladies’ cross country events, the Norwegians are joint favourites with Finland to clinch gold in the team sprint, with heroine Marit Bjoergen chasing her 10th Olympic medal.

They will also be seeking medals in the men’s team sprint, with Russia and Sweden their main competitors for gold.

Alpine skiers Ted Ligety of the USA and Austrian Marcel Hirscher go head-to-head in the men’s giant slalom, an event they have dominated over the past four seasons.

Czech speed skater Martina Sablikova later defends her 5000m Olympic title, as she takes on Irene Wust of the Netherlands who is seeking her fourth medal in Sochi.

North America are fancied to dominate the two-woman bobsleigh, with America’s two teams challenging the Canadian reigning champions Kaillie Humphries and Heather Moyse who are keen to secure a second Olympic gold.

The final two medal events are in the men’s and women’s parallel snowboard giant slalom at the Rosa Khutor Extreme Park where Swiss Patrizia Kummer and Austrian Lukas Mathies are favourites.