Sochi 2014: A day earlier it was doom and gloom in Russia after ice hockey defeat to the USA but Jamaica's bobsled revived party 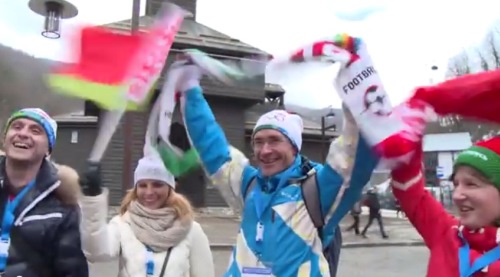 Jamaica’s two-man bobsleigh revitalised the party atmosphere in Sochi as they made their debut to lift the mood after Russia’s ice hockey team lost to bitter rivals the USA a day earlier and looked edgy as they scraped past Slovakia on day nine.

Although the Caribbean duo consisting of 46-year-old Winston Watts and 30-year-old Marvin Dixon finished last, over four seconds of Russia’s pace, home spectators waved flags and roared their seal of approval to Jamaica’s plucky pair, the island’s first bobsleigh representation at the Games since 2002.

Beforehand Kjetil Jansrud won his second medal of the Sochi games with gold in the men’s alpine skiing super-G after winning bronze in the downhill event.

It’s a little bit of a cliche, but it’s something you dream about since you’re a kid and I’m one of those kids so being here is an amazing feeling

The 28-year-old finished 0.3 seconds quicker than the United States’ Andrew Weibrecht – who improved on the bronze he won four years ago in Vancouver.

The America was joined on the podium by his teammate, Bode Miller, who tied for third place with Canada’s Jan Hudec.

Miller’s bronze makes him the oldest alpine skier to win a medal in history, as well as joint-second most successful US winter Olympian with six medals – just two behind short track skater Apolo Ohno.

Jansrud couldn’t believe his name was first on the board when he finished his run after what he considered to be a difficult start.

“It’s a brilliant day and an honour to be at the top of the podium in an Olympic competition,” Jansrud added.

“It’s a little bit of a cliche, but it’s something you dream about since you’re a kid and I’m one of those kids so being here is an amazing feeling.”

Sweden’s men’s relay team defended their 4x10km cross-country gold in impressive fashion, by completing the course 27.3 seconds in front of their competitors.

The quartet of Marcus Hellner, Lars Nelson, Johan Olsson and Daniel Richardsson led from start to finish and their win mirrored the achievement of their female compatriots.

The battle for silver was won by Russia, who were watched by president Vladimir Putin, while France had to settle for bronze.

Elsewhere the Czech Republic’s Eva Samkova dominated the ladies’ snowboard cross qualifying top before winning both her quarter and semi-final on her way to gold.

The 20-year-old finished ahead of Canada’s Dominique Maltais in second and Chloe Trespeuch of France in third.

The Netherlands’ dominance on the speed skating track continued with Jorien ter Mors leading another clean sweep in the women’s 1500m event with an Olympic record.

Finally Ole Einar Bjoerndalen’s quest to become the most successfully winter Olympian of all time was delayed as the men’s 15km mass start biathlon was postponed till Monday due to poor weather conditions.