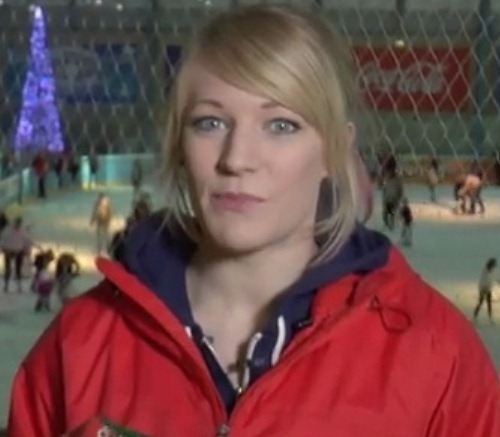 Short track speed skate Elise Christie was left in tears for the second time at these Olympics after a controversial judging decision in Sochi.

Christie appeared to win her heat in the 1500m but closer inspection showed she had failed to cross the black line painted on the ice, skating just ‘millimetres’ inside it.

Coach Nicky Gooch tried to argue her case and admitted the decision left him shocked.

I don’t know what to say, I’m just confused. It’s out of my control now, it’s happened and I need to get on with it

“The referee said Elise didn’t cross the line,” he said.

“Where the finish line crosses the track, she crossed inside that line. The judge ruled she was off track and that means officially she hasn’t finished the race.

“The top three qualified, she’d done nothing wrong. She tried to win the race because there is a benefit to that and the referee has called it off track.

“I’ve seen it called before but it doesn’t happen normally and I was really shocked. I’ve looked at the video and we’re talking millimetres here.

“To the letter of the law it’s probably right but she’s clearly qualified through that race but the rules say you can’t be inside the line.”

Christie was left stunned by the decision, which unlike her disqualification in the 500m final, left even seasoned observers of the sport surprised.

“I was waiting to watch my team-mate (Charlotte Gilmartin) race and I didn’t know whether I’d come first or second but I believed I’d qualified and skated a clean race,” she said.

“However, they’ve disqualified me. I don’t know what to say, I’m just confused. It’s out of my control now, it’s happened and I need to get on with it.

“I’m looking forward to getting back out there for the 1000m but it’s been a hard few days and I’m struggling to bounce back. I’m just going to try my best.”

Christie will now try to reset her sights on the 1000m next week, her signature distance in which she is the reigning European champion.

But team-mate Charlotte Gilmartin is looking even further ahead, after finishing fifth in her 1500m heat.

“I wanted to do as well as possible but this was always about preparing for the next Olympics and getting the experience of competing on this stage,” she said.

“I’m not beating myself up too much, I’m just going to go home and train even harder.”