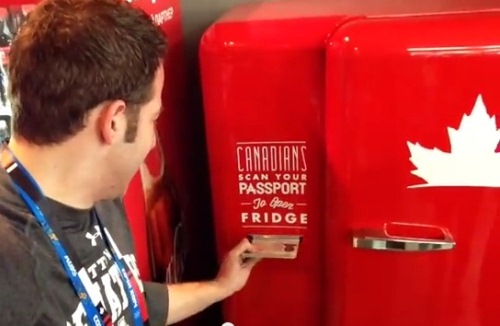 North Americans are known for their patriotism, though Molson Coors has taken this to new extremes providing free beer to all Canadian passport holders in Sochi.

Molson Coors’ fridge can be found in Canada’s Olympic house but only opens once the electronic reader recognises the passport’s template.

As an official sponsor of the Canadian team, Molson Coors’ social media manager Tonia Hammer told CTV news that the fridge offers a little taste of home for travelling athletes and officials.

“The reaction’s been great as people are actually like wow, I can’t believe it works – it’s a great photo opportunity and everyone wants a picture with it.

“It’s a cool invention because Canada and beer go naturally together,” Hammer said.

“We thought Sochi was a great place to bring another real world experience for the fridge.”

Hammer’s comments refer to a 2013 YouTube campaign, which featured bemused locals surrounding the fridge in London and other cities throughout Europe.

Co-ordinator of sponsorships and events at Molson Coors, Dasha Tsvetkova, told CTV news: “Unfortunately he’s not Canadian but we gave him our passport to use and he loved it.”

A big win in speed skating deserves a BIG beer! You earned it, Denny. http://t.co/qXKmZme81L pic.twitter.com/Dw494avFZ3

Another machine is housed in Molson’s headquarters in Toronto and although this one’s journey to Sochi via boat took a month and a half – it has proven a gold standard attraction.