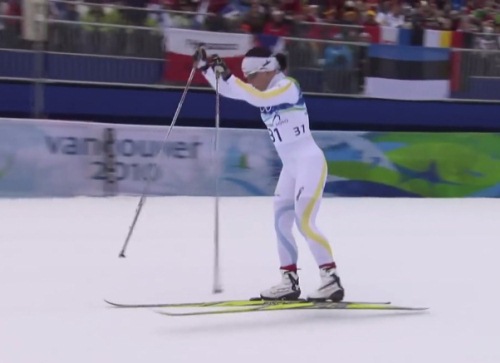 Charlotte Kalla has become the first athlete to win three Olympic medals at the Sochi Games after winning gold as part of the Swedish ladies’ 4x5km relay team.

Combining the 26-year-old’s two silvers in the ladies’ cross-country 10km classic and 15km skiathlon with her two medals from Vancouver 2010, she is now Sweden’s most successful cross-country skier ever.

It is the first time Sweden have won gold in the ladies’ relay since 1960 and Kalla paid tribute to her teammates who mobbed her as she crossed the finish line to claim the victory.

“Emma [Wiken] stayed in front of the whole group and Anna [Haag] was a real fighter. I was so motivated when I got out on my lap – I cannot believe we’re Olympic champions,” said Kalla.

On the final leg Kalla overcame a 25-second deficit to win a three way sprint on the final straight by just 0.5 seconds to condemn Finland to silver and Germany to bronze.

Haag claimed their team spirit was a key factor and believed the fun atmosphere that this bond creates allowed them to perform at their very best.

“When we were waiting for Charlotte in the finish area I could barely believe it – it was crazy – she was skiing like a god,” she said.

The gold takes Sweden’s cross-country tally in Sochi to eight, surpassing Norway’s total of seven, as well as breaking their previous record set in Vancouver.