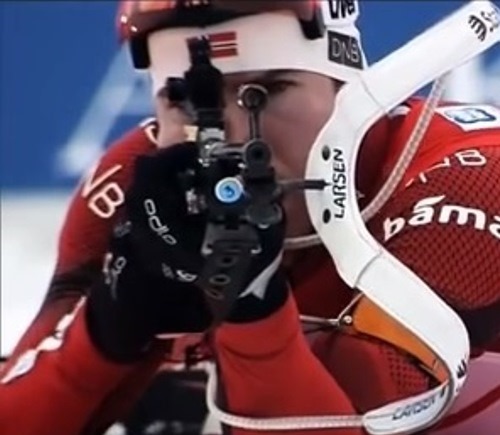 Three-times Olympic gold medallist Svendsen raised his arms triumphantly as he neared the line, unaware Fourcade was lunging for the finish post though luckily for the Norwegian his ankle was shown to cross first.

Fourcade had to ski an extra 150 metres after the first shoot of four when he missed once and was forced into a penalty loop.

Of course I imagined myself on the golden podium once in a while, but today he was a better biathlete

Meanwhile Svendsen’s compatriot Ole Einar Bjoerndalen, chasing the title of most decorated Winter Olympian, was left to rue a horror final shoot where he missed four times out of five having entered the range in fourth, seconds off Svendsen and Fourcade’s lead.

Czech Ondrej Moravec claimed bronze after losing ground on the front pair in the final sprint to add to his silver in the 12.5km pursuit last week while Fourcade can be consoled by becoming the first Frenchman to win three medals at a Winter Games since Jean-Claude Killy’s alpine skiing heroics 46 years ago.

Svendsen said the under-fire Norwegian wax technicians should be proud of the medal after plenty of criticism back home for not providing skis that ‘glide’ for the athletes.

“At the beginning of the Olympics it was very tough because I had problems with my skis, but we are back were are supposed to be,” Svendsen said.

“It might have looked like I could lose gold, but I had good control over him. I knew I would get gold. It looked closer than it was. I looked at the finish photo and was surprised how close it was.”

“Martin is first of all a very good and honest guy. When he loses he is a much better guy than me when I lose. He is one of the most respected athletes in the field.”

Norway set a roadblock at the front at the start of the race though Fourcade shadowed Svendsen and 40-year-old Bjoerndalen’s every move, the competitors flinging their bodies around the course as the snow fell and the loudspeaker played out the Daft Punk’s 2013 hit song ‘Get Lucky’.

Bjoerndalen however missed two shots in the first shooting to Fourcade’s one as Russia’s Anton Shipulin took a narrow lead following the worst standard of shooting at the Games yet, only 13 out of 30 entrants hitting all five targets.

Svendsen showed the form that has brought him four World Cup wins out of seven events so far this season into the second shoot and led Fourcade and Bjoerndalen by over half a minute midway through the race, Moravec narrowly behind in second.

However Fourcade and Bjoerndalen gained time to be only 12 and 17 seconds behind respectively with one range effort remaining and the in-form Frenchman soon closed the gap to the leading pair.

Fourcade, Svendsen and Moravec were inseparable moments after the final shoot despite the Frenchman’s four-second advantage leaving the range as Bjoerndalen fell away.

The extra 150-metre loop played its part as Svendsen carved up the inside of an usually fatigued Fourcade on the final corner and despite a slightly premature celebration, more in exhaustion than anything, the Norwegian clung on by the skin of his teeth for a fourth Olympic medal overall from four different biathlon events.

Martin is first of all a very good and honest guy. When he loses he is a much better guy than me when I lose

“He’s usually faster than me on a sprint and it’s not the first time he’s beaten me on a photo-finish but many times I’ve made him crack at the shooting,” said the Frenchman, who overcame a bout of sickness before Tuesday’s race.

“We’ve been racing and competing together for three years now. Of course I imagined myself on the golden podium once in a while, but today he was a better biathlete.”

“He has been the leader of this sport for four years now. I am right there behind him, but you could say that today – close, but not there.”

Bjoerndalen, as well as chasing his 13th Games medal to go one clear of compatriot Bjorn Daehlie, had his countryman’s record of eight Winter Olympic golds in his sights with seven so far but ended up well back in 22nd place and will have to rely on a medal in the relay or team event later this week.