Sochi 2014: Two greats of alpine skiing, Bode Miller and Aksel Lund Svindal, have one final chance in Sochi to fight for medals 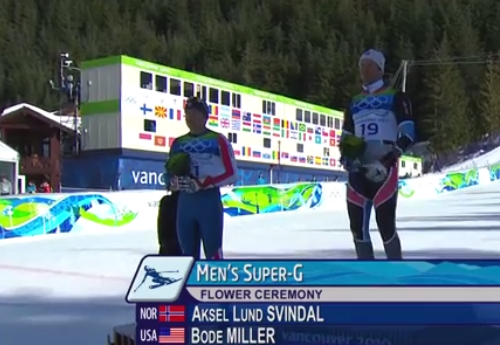 Two giant alpine names have been rendered virtually anonymous at the Winter Olympics as a flurry of underdog success stories has banished them to the outskirts of Sochi folklore.

A prediction of a 2014 games round-up would have been focused primarily on the intense rivalry and clashes between accomplished duo Bode Miller and Aksel Lund Svindal.

American Miller is a five-time Olympic medallist, and one of the greatest World Cup racers of all time with 33 wins, whereas Svindal is a two-time overall World Cup champion, with three Olympic medals under his belt.

If you want to fight for medals, you have to be prepared to lose out on them

However, the two have suffered a series of underwhelming results, uncharacteristically missing out on three medal opportunities each.

Is this destined to become the biggest rivalry that never was?

The Super-G provides the last opportunity for the pair to battle it out for gold and silver, as they did repeatedly in Vancouver four years ago.

In 2010, the two left with a full medal set of gold, silver and bronze each across three of their specialist four disciplines; super-combined, Super-G, giant slalom and downhill.

The Norwegian trumped Miller in two events, famously by only .02 of a second in the epic downhill tussle for silver, and by 0.28 to clinch his only Olympic gold in the Super-G.

The contrasting personalities of the two, who have battled for a decade, have determined the extremely different paths they have taken on the road to Sochi.

Miller underwent knee surgery in spring 2012, so skipped the 2013 season to rest and ensure a fifth Olympic appearance, relying on his usual spontaneous Olympic magic to see him through.

On the contrary, Svindal has excelled this season, his European steel dictating that to be the best, you must stay at the top.

“You can always be good once in a while but to perform week after week, year after year, that is challenging. But in our sport that is what it takes to be ranked No 1 in the world,” said Svindal on arrival at Sochi.

He is famed for his focus, and is the subject of a film that documents his ability to withstand from blinking for a two-minute run “Blink of an Eye.”

This focus stems from his comeback from a serious 2007 crash and it explains his hatred for under-achieving.

“It is pretty much the worst place to be. I’ve been there before and probably will be again. If you want to fight for medals, you have to be prepared to lose out on them,” he said having come fourth in the downhill.

But the combined downhill on Friday was a bigger let down, with him saying: “I was disappointed after the downhill, but this one… I’m real disappointed now.

“I need to have a reality check because the fact is: I was one of the favourites. I wasn’t happy with my time and I’m a little angry. The snow has changed,” he added.

Miller has more of a relaxed “come what may” attitude, confessing to any mistakes made, but brushing them off as unavoidable consequences of the sport.

“It’s a pleasure for me to ski on this track. I would be angry with myself if I had wasted this opportunity to run properly on this track,” said the 36-year-old.

“In these snow conditions, it’s kind of hard to see the mistakes. When you make mistakes on this snow, it’s really responsive, so when you made a mistake and get on the front of the ski, it really slows you down a lot.

“The mistakes don’t look as dramatic, but the mistakes I made were just deceleration. You can feel them, and I started trying to look for too much and then I made more (mistakes). I could just feel the speed going away.

“I watched enough guys to see that if you weren’t working hard and sticking it, you had no chance. You just can’t make mistakes like I did today.”

Svindal is the red-hot favourite tomorrow, with Miller not far behind, but they will both have to overcome 23-year-old Matthias Mayer, who prised the downhill title away from them in last weekend’s shock result.

Although the Olympics is the perfect stage for shock results and fairytale debuts, it also offers a theatre for veterans to perform, to out-do others that come after them and to engrave their place in the history.

It will be a personal shame for both if neither raise their game and if this pair fizzle out without any such mention in 2014 record books, but fans will equally suffer if robbed of the spectacle of one last Olympic clash between the two on Sunday.