Sochi 2014: Norway's Marit Bjoergen equalled the most individual Winter Games golds by a woman as well as joining two others on 10 overall medals 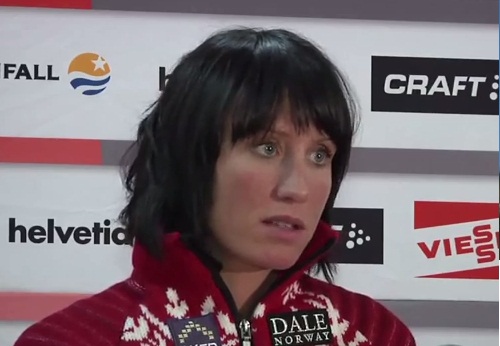 There is no stopping Norway’s Marit Bjoergen, who ended her Sochi campaign by equalling the most individual gold medals for a female Winter Olympian as well as joining two others on ten overall podium finishes, in many eyes handing her the ‘most decorated’ title to follow in compatriot Ole Einar Bjoerndalen’s footsteps this past fortnight.

The record is not meaning a lot to me right now. It’s a revenge from the relay and for all the waxing guys

Though her tenth Olympic medal of her career also left her tied with fellow cross-country skiers Italian Stefania Belmondo and Russian Raisa Smetanina, Bjoergen has a better rank of medals (six gold, three silver and one bronze).

However, all she could think about was praising the tireless efforts of the team that prepare the skis, who were heavily criticised in week one of the Olympics because Norway were not dominating as they so usually do.

“I am not thinking about how many medals I have,” said Bjoergen.

“This 30km had been a motivation for me, it was this distance I wanted a medal on. It’s a revenge from the relay and for all the waxing guys. So the record is not meaning a lot to me right now.”

Last Saturday Norwegians were left stunned by a lowly fifth place in the 4x5km relay, apparently the fault of poor skis.

Today, with Bjoergen leading home Therese Johaug and Kristin Stoermer Steira, they could find no fault.

“I knew that I am stronger than them in the sprints, so I was waiting for them to attack on the last climb. Therese upped her speed and I just followed her, then I passed her,” said Bjoergen.

The sweep was the first for Norway’s women and a record 12th for the Scandinavian nation at a Olympic winter games.

We knew we were stronger than that. We had very good skis, the waxing team did a great job

Cross-country skiing had not seen a sweep since the 1992 games when Vegard Ulvang, Bjorn Daehlie and Terje Langli of the Norway occupied the podium following the men’s 30km classic event.

Johaug, who is seen as Bjoergen’s natural successor, scooped her second medal of the games following on from bronze in the ladies’ classic event.

“It’s really good to take the silver medal here today and for Marit to get gold, and for Kristin to get bronze,” the 25-year-old said.

“It means a lot to the team. We have come back from the relay, where we finished fifth.

“We knew we were stronger than that. We had very good skis, the waxing team did a great job.”

Stoermer Steira took a surprise bronze as the Norwegians skied as a team from the start of the race but it was every lady for herself in the closing stages.

For Stoermer Steira it was her first individual Olympic medal as she was part of the team that won the 4 x 5km relay in Vancouver 2010.

“Finally. I’ve tried so many times and finally I success and get a medal. It’s amazing, I don’t think words can explain,” the 32-year-old said.

“It’s all or nothing. It has been a lot of hard work but also a lot of fun. Right now I’m smiling all the way but when I crossed the finish line, I felt emotional.”

As for the ‘Iron Lady’ Bjoergen, she has yet to decide whether she might attempt to qualify for the team at Pyeongchang 2018, with the 2015 world championships in Sweden also on her radar.

“Four years is a long time and I’m not getting younger. I’m also thinking about having a family. We’ll see after Falun (2015) if it is possible to do the Olympics.”

Sochi 2014: Equality at the Olympics jumps forward in Russia