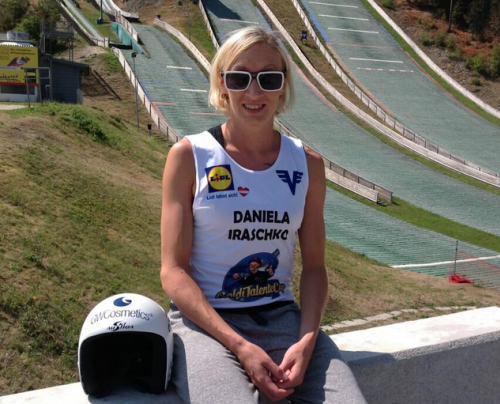 Lesbian ski-jumper Daniela Iraschko-Stolz has shrugged off the fuss made over the intense international criticism of Russia’s anti-gay stance that has dominated coverage of the Sochi games.

Austria’s Iraschko-Stolz, who married her partner last year, has said that media attention on the laws banning gay propaganda has been heavily exaggerated.

Ahead of Tuesday’s normal hill individual event she was inevitably questioned if she had been subject to any negative reception at the games.

I always say I’m together with my woman now and don’t have any problems, not in Russia or with the Austrian federation. Ten years ago it was different

“No, on the contrary, I think everything is being blown up bigger than it is. I had a very good welcome like every other athlete. There were absolutely no problems,” she said.

“I always say I’m together with my woman now and don’t have any problems, not in Russia or with the Austrian federation. Ten years ago it was different.

“I don’t think it’s a good idea to make protests here, no one cares.

“I know Russia will go and make the right steps in the future and we should give them time.”

Iraschko-Stolz seems more focused on feminism debates rather than homophobic campaigns, having been a leading figure in the fight to have womens ski-jumping included for the first ever time in Sochi.

She and 14 other women jumpers unsuccessfully sued the organisers of Vancouver 2010 for the right to compete, and she preferred to sway attention to her joy at being a part of the Winter Olympics for the first time.

“I’m really proud that women’s ski jumping is part of the Games. That is for me a victory. My goal now is to win a medal, but it will be hard,” she said.

“Living in the Olympic village is much better than I’d ever imagined. At the moment I’m living like a fairy tale because as a child I always wanted to take part in the Olympic Games.

“That it’s happening now at the age of 30 is unbelievable… every day when I wake up I’m still here and that must mean it’s true.”

She is determined to let her performance answer any doubts about her right to be at the Games, finishing first in two training days on Sunday before not bothering with a third outing.

“I am here as a sportswoman. I only want to focus on sports and to jump pretty good is also a statement.

Her biggest competition will come from 17-year-old Sara Takanashi who is the clear favourite with ten World Cup victories this season.

However, the 30-year-old broke Takanashi’s four-event winning streak at the end of last month and is the only woman other than Takanashi and American Sarah Hendrickson to record at least five individual world cup wins.