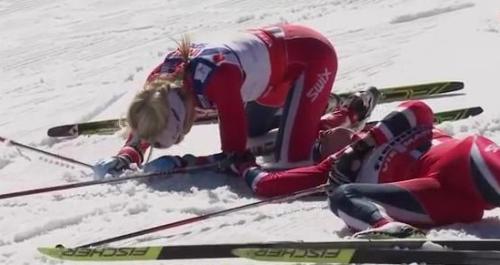 As Marit Bjoergen’s three golds made her the most successful women Olympian in history, her nation Norway and neighbours Sweden dominated cross-country skiing at Sochi with 11 medals apiece.

The 33-year-old added to her previous seven medals, three of which were gold, with wins in the 15km skiathlon, team sprint classic and 30km mass start.

Its looks likely that this accomplishment will prove her swansong as the Norwegian immediately cast doubts on her likelihood of featuring in the 2018 Pyeongchang games.

“Four years is a long time, and I’m not getting younger,” Bjoergen said. “I’m also thinking about having a family and I don’t want to do this at 90 per cent.

“When I’m finished skiing I can think about how many medals I have but right now it doesn’t mean much.”

Despite her potential absence, it seems very likely that double gold medallist Dario Cologna will star again in South Korea.

The 27-year-old Swiss skier won the 30km skiathlon and defended his 15km classic gold from Vancouver, becoming only the third man ever to do so.

Justyna Kowalczyk became Poland’s greatest Olympian ever after her gold medal in the 10km classic took her tally to five medals – including another gold from Vancouver.

Despite competing with a fractured foot, the 31-year-old finished 18.4 seconds ahead of Sweden’s Charlotte Kalla, who herself secured three medals in Sochi.

The Swede added to her silver in the 10km classic with silver in the 15km skiathlon before winning gold in the ladies’ 4x5km relay, to become the first person in Sochi to finish on three podiums.

Sweden’s men’s relay team mirrored their compatriot’s achievement by winning the 4x10km ahead of Russia’s team who on the day were watched by president Vladimir Putin.

In case this wasn’t impressive enough on the last day of competing in Sochi, Alexander Legkov led Russia to a clean sweep in the men’s 50km mass start.

The 30-year-old finished ahead of team mates Maxim Vylegzhanian in second and Illia Chernousov in third to ensure the host nation ended the games on top of the overall medal table.

Norway’s Ola Vigen Hattestad and Maiken Caspersen Falla won both the men’s and ladies’ sprint free finals respectively, to take give their nation its fourth and fifth gold.