Sochi 2014: Boring game? Try roaring, as curling bids farewell to Sochi with a final set to get pulses racing 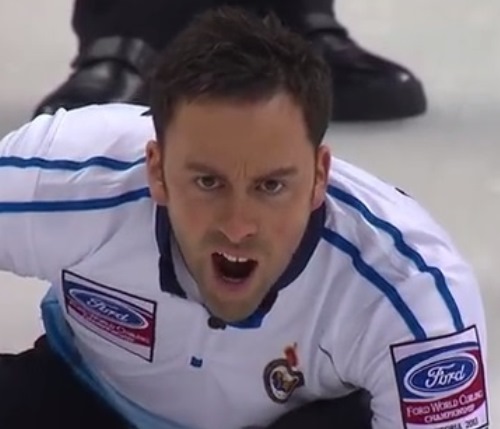 It was meant to be the Games when extreme sports grabbed the younger generation and made everyone want to be a snowboarder, a ‘lifestyle sport’ in which, whether you’re bummed or stoked, everybody is your friend.

But these Olympics will also be remembered for when curling became cool. The roaring game is a boring game? Not here in Sochi, where some skips are pumped up like they’re about to play ice hockey.

Canada’s Brad Jacobs, who meets Briton David Murdoch in the men’s final today, and his team are known as the ‘Buff Boys’ back home. They clearly spend as much time pushing weights as they do throwing stones.

If I see the team we are playing against get aggressive and show anger, I think our guys should be happy because we’d have them exactly where we want them to be

While the Norwegians are known for their trousers, Team Jacobs are famed for their tight shirts and a brand of curling that does not always make them popular.

“The aggressive style we have seen from the Canadians here, that’s something I don’t like about the sport,” said Great Britain and Scotland coach Soren Gran.

“I don’t think it helps anyone. It doesn’t help the player and it doesn’t help his team-mates. I tell my guys to work a different way. If they miss a shot, they’ve got another 15 to play; you can’t be angry with the one you miss.

“If I see the team we are playing against get aggressive and show anger, I think our guys should be happy because we’d have them exactly where we want them to be.

“I try to encourage our team to like and enjoy what they are doing and to believe in themselves.”

“There is a mutual respect. But when you step out on to the ice, you both want to beat up on each other,” Jacobs said.

“We bring a lot of intensity, that’s our style and the type of people we all are. It’s almost like that switch that goes off in your head when you step on to the ice.

“You become a different person. I don’t know whether we are bullies or intimidating; you’d have to ask other teams that.”

British skip Murdoch and Jacobs practised on adjacent sheets yesterday, without a nod of recognition or acknowledgment.

Murdoch was still on a high from his semi-final win the previous night, while Jacobs was all business. He will start today’s match the overwhelming favourite.

“We will only ever get one chance to get an Olympic gold and we want to make sure we do everything we can to do it,” said Murdoch, admitting he had barely slept a wink since securing the Olympic silver that today he will try to upgrade.

“It’s not a given, we have to fight hard, focus and be precise. We are capable, there’s no doubt about it.

“We have beaten most of the top teams here. We know we had a shot to beat them the last time so now it’s just a case of believing. We’ll go out and just give it everything.”

Murdoch credits Gran, a Swede, with turning around his curling career after the last Olympics in Vancouver. The skip moved to Stirling, started training full time and “got his head straight”.

Gran also stopped the team from spending too much time in the gym; he wanted them on the ice, sharpening their curling skills.

In 2011 David was not in a good place and didn’t know what to do with his life…He couldn’t do something halfway; that would have destroyed him

“Soren came on board and made me believe my best years were ahead of me,” adds Murdoch.

“I was in a pretty bad place after Vancouver; I thought that was me done in the sport.

“He made me realise that I’m young in curling terms, he made me work on my technique and practise harder than I’ve ever done before.

“I was throwing 100 rocks a day just to get better, though sometimes you wonder why you’re doing it at six o’clock in the morning.”

Gran is an impressive character, who manages to combine being hard with being liked, and he is not afraid to make tough decisions, bringing in Murdoch to join Greg Drummond, Scott Andrews, Michael Goodfellow and their established skip Tom Brewster last year.

Brewster had won two world silver medals with his team but Gran thought something was missing – and Murdoch was the edge they needed to be competitive in Sochi.

“All the guys realised to take a gold medal we needed another player and the best player outside those four guys was David Murdoch, who didn’t have a strong team of his own. I thought it was a waste of time to have him outside these guys,” Gran said.

“In 2011 David was not in a good place and didn’t know what to do with his life. The last Olympics was tough on him but I said he had two choices – to give it all or give it nothing. He couldn’t do something halfway; that would have destroyed him.

“I just encouraged David to sort out his thoughts, it was his choice to commit to what we were doing.

“However, I totally understand Tom’s disappointment and how he feels about this. I have full respect for him because it was his team that won two world silvers before David was brought on board. When we brought David in it was not to move Tom away, he had a full chance to be skip and lead this team but we made the change.

“You want to win Olympic gold, you need to make tough calls.”

Making tough calls . . . expect to see a few of those in today’s final.