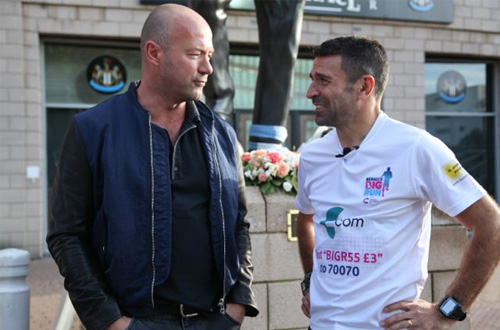 The 45-year-old is running to all 20 Premier League stadiums, averaging between 40 and 50 miles a day, and the former Saints full-back has already raised almost £57,000 following visits to prestigious grounds such as Anfield and Stadium of Light.

The Sport Review caught up with the Saints legend to see how the challenge was progressing at the end of day 16.

How is the run going so far Francis after reaching nearly 1 million steps in 16 days?

We’ve come through Tunbridge Wells today. Over the bridge and back into England and we’re currently in Swindon. We’ve still got a fair bit of mileage but we still have a couple of days before we reach QPR, the first London club.

How are you finding it? Is the body holding up after retirement?

I’m running around 40-44 miles per day. I actually had the knee problem flare up in the later stage of training [for the run]. I had a couple of injections in it beforehand to settle it down. It has flared up on the way round and when it has, it has been pretty painful. The medical care that I’ve been getting has helped to get me going again. It has kept me going, and the support of my family and sponsors has been amazing. There have been tough times but we’re getting closer day by day. It feels like coming back from Swansea, we’re heading in the right direction. We’re at day 16 of the challenge so it is going OK.

How did you come up with the idea? Has it been more demanding than you expected?

The idea came from being intrigued by people who do ultra-challenges and extreme tests. I liked the idea of testing myself with some kind of event to see if I could deal with it and complete something like that. I thought it would be a big tick in the box from a personal point of view but it would be a great opportunity to make the challenge extreme enough to raise a huge amount of money for a fantastic cause. Cancer Research was something that is close to our hearts as a family and most families have been touched by it in some shape or form. I came up with the idea of running to all the stadiums as a connection to my past and extreme enough to get people to donate to the cause.

Once you complete the challenge, could there be another on the horizon? Perhaps Southampton in the Champions League?

Has it been great seeing former team-mates and fellow ex-professionals on the run?

I haven’t seen Alan [Shearer] for a long time but he came along to start the challenge. Matt [Le Tissier] is a close friend and has been throughout our career and since we finished. Matt and his wife has been amazing, coming up for the run and spreading the word. James Beattie, Danny Ings, Dean Hammond… Matt is going to come out and do another little stint. It has been fantastic to meet up and see ex-colleagues and team-mates as well as support from people who have been supporting the challenge.

What has the support been like from the fans?

The Saints fans have been amazing. One of them had been following me on the GPS that we set up and he popped up in canal coming into Birmingham. It is amazing that it can work like that. It has been great. I really appreciated their support and to join me for a few miles. It was such a nice boost, especially as it is a long way around the country. It is funny seeing the accents change as we work our way around the country.

Rooney, Neville and more: Twitter reacts as England down Switzerland