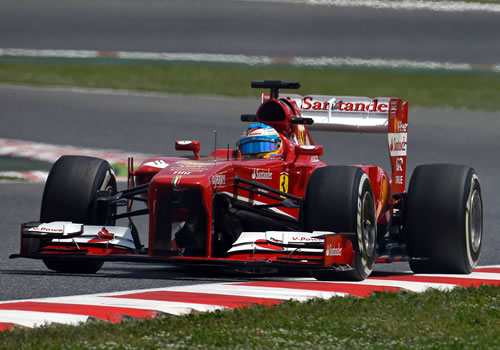 Fernando Alonso hailed an “emotional” day, after the Ferrari driver came from fifth on the grid to win the Spanish Grand Prix.

Alonso hit the front early on and saw off the challenge of Kimi Raikkonen at the Circuit de Catalunya to move into third in the drivers’ championship.

The Spaniard paid tribute to his home support and the staff at Ferrari for delivering a memorable race day.

“It was definitely a fantastic emotion,” said Alonso.

“You feel the support from everybody and every single member of the team taking care of every detail because we want to do well here in front of our fans.

“We did it, we are happy for that but we don’t want to stop here, obviously.”

Felipe Massa completed the front three, and a Ferrari double podium, to help the team leapfrog Lotus into second in the constructors’ championship.

The Italian team capitalised on a poor Grand Prix for Red Bull to move within 24 points of the leaders, but Alonso insisted their plans do not change.

“Nothing really changes,” he added. “We know that we have five races only, some ups and downs.

“We know that we have a car to fight at the top and if we do well we can fight for the championship.”

Massa’s third-placed finish is his first podium of this season, which he secured from back in ninth on the grid.

And the diminutive Brazilian believes the result is a sign he is back to his best on the track and that Ferrari are now hitting form.

“Yeah, I think so,” said Massa. “I was disappointed after the qualifying, losing three places, but the race was very good for us, our car was fantastic.

“We were very aggressive straight away, I took back the positions – I think after the first lap I was already sixth.

“I think the race was very good for us.”