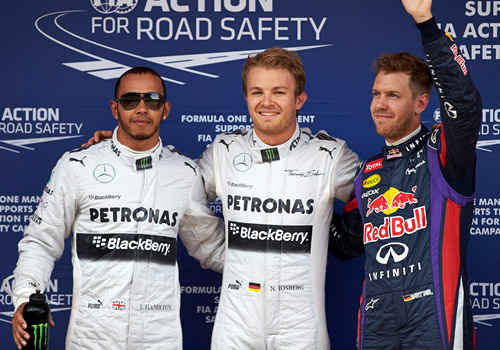 Nico Rosberg has preached “caution” ahead of the Spanish Grand Prix after pipping Mercedes team-mate Lewis Hamilton to pole position.

The German claimed his second pole in as many races before Hamilton secured a Mercedes front row, while the Red Bull of Sebastian Vettel rounded off the top three.

But Rosberg was at pains to point out the work is not over after failing to press home the qualifying advantage in Bahrain with a ninth-place finish.

“It’s always a good motivational boost, especially for the team – front row is fantastic,” he said.

“But of course I have to be wary because of what happened in Bahrain. It’s nice, but it’s to be enjoyed with caution.

“I was thinking about Bahrain a lot, so I’m a bit surprised to be as quick here.”

Hamilton was the favourite heading into Q3, posting a storming lap in the second qualifying session to lead the field by six tenths of a second.

The 28-year-old – who opted for just one flying lap in the final ten minutes – heaped praise on both Rosberg and his team.

“Congratulations to Nico – he did a great job, so I’m very happy,” said Hamilton.

“But also well done for the team. This is all down to the great work everyone’s doing back in the factory so I’m very proud to get a front row for them all.

“But as Nico said, we have to approach it with caution as the race is going to be tough.

“I didn’t have two option sets in the end which would have helped, but Nico was just a little quicker.”

Catalunya’s final sector has proved a bugbear of Vettel’s in the past, but the three-time world champion insists he is getting better after coming closest to matching Mercedes’ blistering pace.

“I was pretty happy with the last sector because historically, it’s been a bit weak for me,” he said.

“So I think after a couple of years I think I now understand the last few corners a bit better.

“In practice I wasn’t really happy, but I think we improved the car as things calmed down to have a pretty smooth qualifying session.

“We had a little bit of a different approach to the majority of people – using option tyres only – and whether that will help us in the race we shall see.”