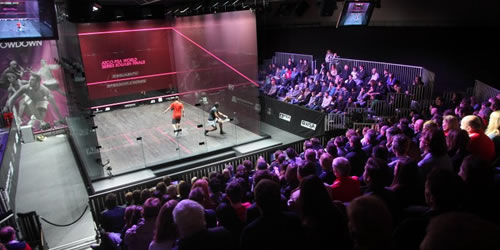 Squash is bidding for inclusion in the 2020 Olympics Photo: Jordan Mansfield

When the fast-growing sport of squash missed out on selection to join the Olympics first for London 2012 and then, in 2009, for Rio 2016 as well—the nod went to rugby sevens and golf—the writing was on the wall.

And so the campaign to transform this challenging and widely-played sport into an equally popular spectator sport took off.

Now, with the cycle for approval for 2020 already under way, how has squash risen to the demands of international sport in this decade of live broadcast, live-stream and showcase action?

Having faced two rejections in a row, the chief executive of the Professional Squash Association, Alex Gough, subsequently admitted to the BBC that they needed to respond fast to the concerns put forward by the IOC:

“Squash hasn’t been great at showcasing its athletes, until now. We have always had the players but they haven’t been placed in the professional-looking events that they deserve…We have really improved the sport for TV over the last two or three years.”

The latest inspectors from the IOC, who attended the spectacular Hong Kong Open last week, had the chance to see for themselves. There, they took in the latest hi-tech glass court—planted, no less, on the Hong Kong sea-front—with increased TV camerawork and under-lit floors, which showcased some of the world’s fittest athletes competing at the highest level of competition.

The inspectors, though giving little away, seemed to like what they saw, according to one of the party, Walter Sieber: “We found that the competition arrangements were of a high level, and on court we were able to see the top players in action too. It has proven to be very informative.”

Cause, then, for optimism that this most dynamic of sports could join fellow racket-sports, tennis and badminton, as one of the big draws in the Olympics. Certainly the President of the World Squash Federation was happy:

“I could not be more happy with this weekend. While it is not one of our largest events by capacity, it has been framed to bring squash to the public, and the placing of the all-glass show-court on the Avenue of the Stars at the Harbour certainly did that.”

Briton’s Nick Matthew, currently defending his World Championship title in Doha, was also enthusiastic: “This venue shows how you can pick up and take the glass court to any great location in the world, wherever the Olympics is staged. It is great that the IOC group have seen that for themselves.”

With the introduction of scoring changes to speed up the action, as well as more TV coverage—Sky Sports will broadcast live coverage of the semi-finals and final of both the women’s and men’s World Series Finals in London next month—squash is certainly broadening its appeal and its reach.

And alongside the competition for entry to the 2020 Olympics—climbing, karate, roller sports, wakeboard, wushu and baseball—it looks an increasingly strong contender when the decision is made next September. Before then, though, the WSF will make its formal presentation to the IOC in Lausanne later this month.

Moving with the times