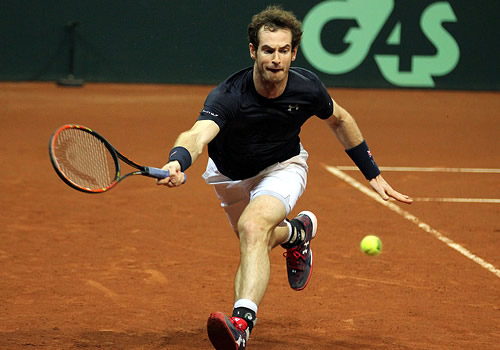 A day later, it is—with a near-perfect sense of timing—St Andrew’s Day.

Near perfect, because Britons everywhere were waking up to newspapers that had turned topsy-turvy in celebration of one particular Andrew. Instead of sporting success and prowess filling the back pages, Andy Murray featured on the front page.

The reasons were plentiful.

This quietly spoken 28-year-old, already a Wimbledon and Olympic champion, had just led Great Britain to its 10th Davis Cup victory, its first in almost 80 years.

He had done so with a commitment and a physical and mental effort that few have matched, even among his illustrious tennis peers.

Try these statistics, for a start.

On both counts, that is more matches than his fellow top-five Davis Cup champions played or won in their title-winning years: Novak Djokovic played eight in 2010, losing one; Roger Federer played nine and lost two in 2014, while Stan Wawrinka played eight and won five; Rafael Nadal played and won six in 2011.

Of course, Murray had some help, notably on the doubles court with elder brother Jamie, and there hangs another tale: the brothers Murray are only the third set of brothers to win the Davis Cup after the USA’s Bob and Mike Bryan—and Britons Reggie and Laurie Doherty over a century ago.

James Ward certainly played a key part, in the first round against the USA, beating the odds and John Isner 15-13, in the second rubber.

However, there is no getting away from the singular, and double-duty, achievement of the younger Murray, as team captain Leon Smith made perfectly clear. Asked how Murray’s year measured up against all-time British achievements, he said:

“Has to be one of the best achievements of all time. I mean, it’s incredible for all of us to watch how he’s managed to win that many rubbers, that many wins, especially when you look back at the tie with France and also the Australia match, a lot of fatigue, managed to find a way through. It was absolutely incredible, amazing.”

For more so than his team-mates, Murray was piling on the wins and points across the board during 2015, with Grand Slam runs at Wimbledon and the US Open falling immediately before Davis Cup ties. The final came within days of the World Tour Finals, where Murray sealed his highest-ever year-end ranking of No2.

Yet there is, and always has been, so much more to Murray than world-beating tennis, a work-ethic par excellence, and a passionate will-to-win. Here is a modest but generous man who is more than happy to stay out of the limelight.

It is no accident that last year Murray won the ATP’s Arthur Ashe Humanitarian award for many charitable activities. He organised fund-raisers after friend Ross Hutchins was diagnosed with Hodgkin’s lymphoma and Elena Baltacha died of liver cancer. 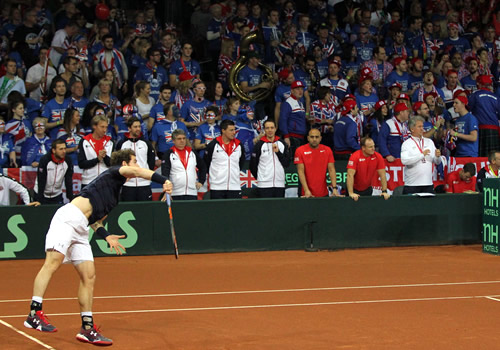 He sent himself up in “Andy Murray: The Movie”, a comic sketch during Channel 4’s ‘Stand Up To Cancer’ campaign, and has raised awareness for the work of Unicef, United for Wildlife and Malaria No More.

Just weeks before the Davis Cup final, he wrote an intensely moving piece about cancer for The Players’ Tribune entitled The Good Ones. It opens: “I’m 28. Twenty-eight feels… young. When I was little, of course, it didn’t feel that way. Back then? Twenty-eight seemed old. But now that I’m here, I know. 28 is… it’s barely anything. It’s no time at all. My best friend, Ross Hutchins, got cancer at 28…”

It is essential reading not just in raising awareness about cancer but in revealing something of Murray the man. He is also one of ‘the good ones’.

Amid the joy of British victory this weekend, it’s easy to forget the mood that hung over Europe, and in particular Paris and Brussels, just a week ago. The terrorists who devastated the French capital a fortnight ago were tracked to Belgium, and the country went onto high security mode, with Brussels at the highest possible level. Many were nervous about travelling, for Brussels was the gateway many had chosen to Ghent.

Talking in London just days before his departure, Murray was clear what he thought.

“I do think the best thing we can do is to live our normal lives, not change too much, because then the terrorists are the ones that are winning. We need to go out there and do what we always do and try not to change too much. That’s all we can do. I don’t want to live my life in fear each time I step on a tennis court.”

The team flew out a day later than planned, but were upbeat about everything they found in Ghent. And the team was not alone in that. The Murrays’ mother, Judy, was there, along with the Andy Murray’s wife Kim, who is expecting their first child in February. They did not stay behind closed doors or sit courtside, either, but cheered and shouted amid the throngs of GB fans and the famed Stirling Uni Barmy Army. For there were, surely, more British fans in the Flanders Expo than the allotted 1,000 seats a day. 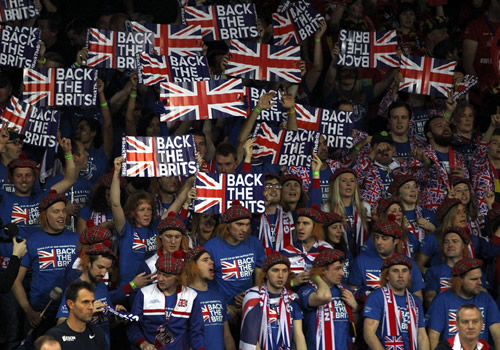 The supporters had brought the orchestrating sousaphone and drums, and banners by the hundred. Not that any of the paraphernalia was quite as outrageous as the giant faces of David Goffin and Steve Darcis that floated among Belgium’s red, gold and black.

There were, of course, rowdy interruptions, horns when there shouldn’t have been, jeers at even the slightest pause in service motion, and a rocking soundtrack that occasionally forgot to stop during play. But this was exuberant, good-natured stuff, as Brits and Belgians jostled alongside one another with no sign of trouble.

The arena, and the trams—which gathered in flocks rather like London buses— that ran the route from city to Flanders Expo, overflowed with stories of a determination to come and share what would be an historic win for either side.

One father and his young son had driven—driven—from Glasgow with tickets only for opening Friday. They, like many of us, shivered our way through bus and tram diversions after a bomb alert in the city—but we made it, happier for the company.

Two women, tennis players, had got lucky in the LTA ballot, but also tried their luck on Belgian websites, and would eventually enjoy both Friday and Saturday. Two big British guys, already with plenty of Belgian beer under their belts, had come for Saturday, would head back to London the next day—but not before a night out in Ghent. They were amiable, enthusiastic, happy just to have been there: “He’s phenomenal, just phenomenal!” That about Murray.

And so the stories continued. The trio of women who offered this stranded journalist a lift to Brussels airport, brimful of stories of selfies with the team. Who knew, they said, that they would be staying in the same hotel as the team? Who knew Andy would look so embarrassed at a spontaneous round of applause when he walked into the lounge?

St Andrew’s day, Murray’s latest blog for the BBC was up, and he confirmed what fans had tweeted long after the presentation ceremony.

“I regret maybe not celebrating as much as I should have done after some of my other wins… That’s why we spent an hour and a half on court after the match taking selfies and chatting with the supporters. I don’t have many personal photos to be honest, but hopefully it made the day that bit more special for those who travelled over to Belgium.”

Yes, one of the good ones. And as a last aside, Murray continued to give £50 to Unicef for every ace he hit from the September semi-final tie right up to the last point, all the while sporting the organisation’s logo on his sleeve.

That fund, with pledges and donations, is currently up to £38,000. Perhaps we can help him out. After such a year, perhaps it’s the least we can do.