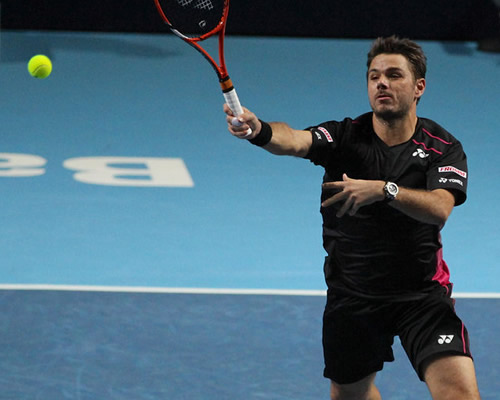 Ahead of Stan Wawrinka’s latest campaign to thrill the home fans in Basel, the No2 seed knew the draw was tough.

In the first round, he fell to the ace-machine, Ivo Karlovic, ranked 23 in the world and enjoying, at the age of 36, some of the best form of his career.

Wawrinka put it simply: “It’s going to be a tough challenge, that’s for sure.”

Basel has, in any case, proved a perennial problem for Switzerland’s second son. For the last three years, he lost in the first round, gripped, it seemed by nerves. And in the 12 years he has played the Swiss Indoors, he had lost his opening match another four times.

But Wawrinka has matured and blossomed in his 30th year to become a regular among the top four. Having won his first Grand Slam last year, he has gone on this year to reach at least the quarter-finals of all four Majors: the semis in Australia and the US Open and the trophy itself at Roland Garros, making him one of only four men this year to beat Novak Djokovic.

He also confirmed his place at his third consecutive World Tour Finals earlier than ever, so the pressure was off. And he sounded confident ahead of his opening test: “It’s always a challenge playing [at home]… It’s never easy to find my best tennis here, it’s quite difficult for me, and yes, it’s a challenge for myself to find a way to play my best tennis. Hopefully this year I can do that.”

But while Wawrinka had got the better of the huge Croat five times in their six matches, their last in Cincinnati went to three tie-breaks. He admitted with a smile: “I think it’s never easy to play him, especially this year—he’s also playing the best tennis of his career. Has a lot of confidence.

“Playing him in Cincinnati was a really close match. You don’t have many chances against him that’s for sure. You have to take what you can, and play well from the first point, because you are under a lot of pressure and won’t have a lot of chances to break his serve.”

But less than an hour after his match was done, Wawrinka was saying almost the same thing from the position of the loser: “You know before the match it’s going to like that, I know what to expect.

This time I had a set and a break and still lost the match. He’s playing his best year so far, improved a lot his game. Serve amazing. Today I got one chance and didn’t take it.”

Indeed Wawrinka looked supremely confident in the first set, got a quick break for 3-1, defending break points as he served for the set, and took the lead, 6-3, in 30 minutes.

Even better, he broke immediately in the second set and held for 2-0. But Karlovic’s serving was hitting the mark and touching 135mph on a regular basis.

The huge Croat is also an enthusiastic net player and his touch and placement improved with every game. And while Wawrinka may have the most famous one-handed backhand in tennis, Karlovic’s was holding its own with angle, slice, chip, and down-the-line pressure.

Karlovic broke back in the sixth game, held to love, and they headed to a tie-break. That was a red-rag to a bull, and Karlovic stormed to the set, 7-6(2) with a huge ace.

The Croat rode his momentum in the third to break in the first game, and Wawrinka found himself attempting to play catch-up for the rest of the match. His solution was to play as fast as possible, barely allowing time for balls to be retrieved between points and certainly not for Karlovic to ready to receive.

Wawrinka almost conceded the match in the ninth game, but saved two break points with some bold serving. It was, though, too little too late. Four winning serves—three of them aces—and Karlovic was the victor, 6-4, after a topsy-turvy hour and three-quarters.

It had been another fine serving display from the man who, earlier this year, took the all-time record for aces in a career. He added 21 tonight, and closes on another all-time record—for aces serves in a single season. He is pursuing Goran Ivanisevic’s 1,477 aces, and is up to 1,361.

Of his racing tactics in the final set, Wawrinka admitted he was trying to find his own rhythm while attempting to break his opponent’s: “I got broken, then I was trying to stay with him, I was trying to play really fast, because that made me more relaxed on my serve and I tried to change completely the rhythm. But I had no chance. I tried to make some returns, but he served too good.”

Karlovic will play qualifier Dusan Lajovic in the second round, where he is also joined by the season’s other top servers. Kevin Anderson and John Isner, like Karlovic, have hit at least 1,000 aces in 2015.

With Marin Cilic, eighth on this year’s ace list also still in contention, these will be challenging times for more than just Wawrinka.

The bottom half of the draw almost lost its next biggest seed, No3 Rafael Nadal, in another see-sawing match against Grigor Dimitrov. The Bulgarian star had the lead in all three sets, only to see Nadal break back in both the first and third to grab his place in the quarter-finals, 6-4, 4-6, 6-3, after two and a quarter hours.

Nadal will next play either Cilic or Teymuraz Gabashvili.