Andy Murray is beaten straight sets by Stan Wawrinka, who sets up a clash with Roger Federer at the ATP World Tour Finals 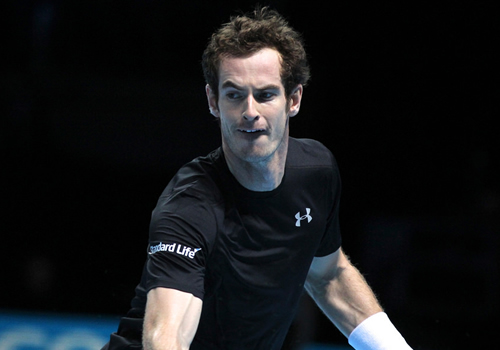 It has already been some year for Andy Murray.

Four titles, including his first ever on clay—one of them by beating Rafael Nadal in his home Masters in Madrid; a second Masters in Montreal over Novak Djokovic; spearheading his nation’s run to the Davis Cup final; and the prospect of his highest year-end ranking, No2, with just one more match-win.

He was now within striking distance of that match-win and, with it, a place in the knock-out stage of the World Tour Finals, where he would take on Roger Federer for a place in his first final.

For with all the permutations that become possible in a round-robin format between the best eight players in the world, it is a rare and exciting occasion indeed for qualification into the semis to come down to a knock-out bout, and in the very last match of the round-robin phase.

He had to get past the world No4, Swiss Stan Wawrinka, who was not having a bad season himself: Also four titles, including the French Open, and two more Grand Slam semis. He had wins over Nadal, Federer, Kei Nishikori and Djokovic this season, but he and Murray had not met for a surprisingly long time.

They had reached this showdown via similar up-and-down matches: Murray beat David Ferrer with relative ease but went off the boil in a 6-4, 6-1 loss to Nadal. Wawrinka also played wayward tennis in losing to Nadal but came alive against Ferrer.

And if it was tough to predict before the match, it was no easier after the first hour. Each worked a break chance in the third and fourth games, each survived. First Wawrinka broke to take a 5-3 lead, then he offered up break point with a double fault, distracted by growing numbers of shouts from the crowd, and Murray took advantage. 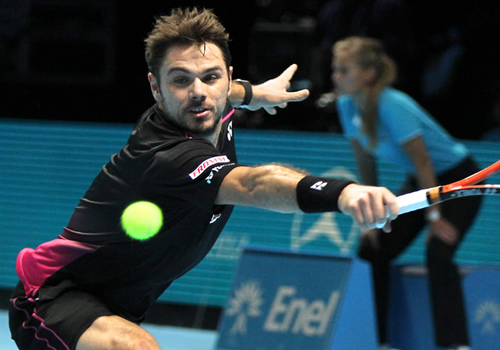 Even in the resulting tie-break, it went one way and then the other. They changed ends with Murray 4-2 up, only for Wawrinka to storm back with five points to take the set.

Wawrinka had the momentum, though his first serve remained inconsistent. But with confidence came his fearsome backhand, and he broke down the Murray defence with a quick break and a love hold.

The sixth game showcased the all-round backhand power of Wawrinka, first a winner down the line, then one crosscourt for a love hold, 4-2. He broke again with another backhand winner, and although he tensed up to produce a flurry of errors and a break back, he pressed on through a final break point, and one last Murray error, his 30th of the match, sent Wawrinka into the semi-finals for the third time in three visits to the World Tour Finals.

On the previous two occasions, Wawrinka lost to Djokovic and, in the match of the tournament last year, to Federer. And he will again face the in-form Federer on Saturday night, and if he wins, he could face Djokovic in the final.

Murray, though, was particularly disappointed about his error count.

“Way too many errors. Cheap ones, as well. Disappointing… Sometimes when you’re playing against the best players in the world, they can play great tennis. Just from my side on the important moments right now I’m a bit disappointed with how I played them. If he had hit clean winners or played great points at 4-2 in the tiebreak, you come in and you say he was too good at that moment. But in the tiebreak, I made bad mistakes at the wrong time.”

In the remaining match of the Ilie Nastase pool, Nadal took on Ferrer in a match that had no bearing on the rest of the tournament: Nadal had already topped the group, Ferrer was already eliminated. And yet they played out the tightest, longest match of the week, 2hrs 37mins, in a cracker of a contest. Nadal led 3-0 in the first set, Ferrer levelled, and Nadal broke again to serve for it, only to have Ferrer take the set to a tie-break—and the 33-year-old No8 seed won it.

Nadal levelled the match with just one break in the second set, and come the third, Ferrer held off five break points in a 15-minute opening game. But Nadal would not be beaten, breaking in the ninth game to serve out the win, 6-4.

Both men got, and deserved, an ovation. But was Nadal concerned that putting in such effort would tire him for semi-final tomorrow?

“Maybe. But I am not worried about it, no. Today was an opportunity to compete well. Winning today is almost like winning a 250 tournament. I fought to made that happen, no? That’s a positive way to finish the season. Let’s see tomorrow what’s going to happen, but I am very happy about what I did in the last five weeks of the season. I finish the season the way that I really want to start the next one.”

Of course his season is far from finished as he now faces his ultimate test, Djokovic, for a chance to reach the final. The world No1 has beaten him in all three meetings this year, twice on clay, so it is a big ask, even with Nadal coming back into fine shape and with good momentum at just the right time.