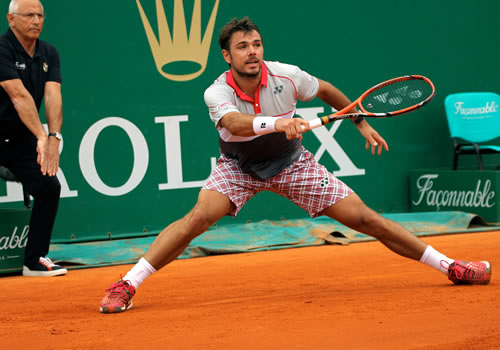 Stan Wawrinka lost in the third round of the Monte-Carlo Masters Photo: Marianne Bevis

Stan Wawrinka has announced that he has split from his wife Ilham Vuilloud after a 10-year relationship.

The Swiss 30-year-old confirmed the news in a statement on Sunday following his exit from the Monte-Carlo Masters last week.

Wawrinka married the Swiss TV presenter and model in December 2009.

“We have enjoyed 10 fulfilling years, with all the ups and downs that every couple experiences, but sometimes life is more challenging than one would hope,” Wawrinka said in a statement.

“Ilham and I were both blessed to create a family when our wonderful daughter Alexia was born in 2010. We have always tried to live our lives as a team and as a family, despite the challenges we have faced due to the demands of my career. To my great regret this isn’t possible anymore.

“Ilham will always be the mother of my daughter and a person that I have a lot of love and respect for. We will always remain as a family. Now my priority is to do everything to protect Alexia during these challenging times.

“I hope that the fans and the media will understand that I’ve always been very protective of my private life and wish to continue to do so not giving any further information about the situation.”

Wawrinka was beaten in straight sets by Grigor Dimitrov in the third round of the Monte-Carlo Masters last week.