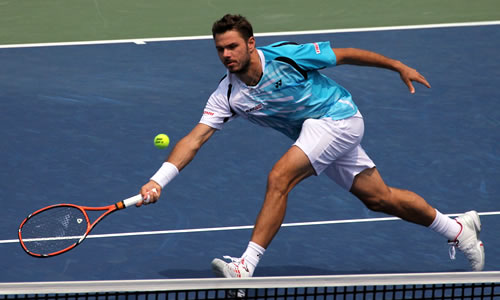 Stan Wawrinka, who tops the seeds at the second of the two ATP 500 events in the Asian swing, the Rakuten Japan Open in Tokyo, is within touching distance of joining the elite eight men for the ATP World Tour Finals for a second consecutive year.

This time around, though, the picture for the modest Swiss is a rather different one from 12 month ago.

Back then, Wawrinka was one of the last to seal his London place after only breaking into the top 10 during the summer.

Certainly the quality of his tennis was never in doubt, but rather his confidence and consistency. However, those who had admired his near-victory over Novak Djokovic in the fourth round of the Australian Open—he lost 10-12 in the fifth set—and then again at the US Open, where he beat Tomas Berdych and Andy Murray, only to lose from two sets to one up against Djokovic, would have had little doubt that Wawrinka was at last fulfilling his mighty talent.

Having reached his first World Tour Finals as the eighth qualifier, he went on to reach the semi-finals, too, but that was nothing compared with what 2014 would bring.

Wawrinka became only the second man in a decade not named Roger Federer, Rafael Nadal, Andy Murray or Djokovic to win a Grand Slam. And winning the Australian Open took him past compatriot Federer to No3 in the rankings for the first time in his 12-year career.

That was not the end of it, either. He scored his first victory over Federer in five years to win his first Masters title at Monte Carlo, and made quarter-final runs at Wimbledon and the US Open, too.

And while Federer may have sneaked past him again in the rankings, Wawrinka has remained locked inside the top four ever since.

So he takes to court tomorrow against wild card Tatsuma Ito in the knowledge that a run to the final will stamp his card as the fourth man for London. However, with four of the world’s top 10 in the field—and perhaps the most dangerous of them, the US Open runner-up and home hero Kei Nishikori, in his half—the going will be far from easy.

The Japanese man arrives on home soil with a post-US Open win in his pocket: He lifted the Kuala Lumpur trophy yesterday. No6 Nishikori, along with No5 and US Open champion Marin Cilic—who plays at Beijing this week—cannot overtake Wawrinka this week, but the Swiss will want to put aside the pressure of qualification as soon as possible.

An interesting quarter-final could be on the cards, too, as Andrey Golubev, who beat Wawrinka in their Davis Cup tie in September, is one of the men still standing after the seeded Alexandr Dolgopolov lost to Jack Sock.

But a far bigger seed has already found the going tough. David Ferrer may currently be No5 in the rankings but he has slipped to No7 in the Race to London. After losing in the third round of the US Open, he made an uncharacteristic straight-sets loss in Shenzhen last week, and he has already fallen for the first time to Marcel Granollers in the first round in Tokyo.

That leaves the way open for another strong contender for the WTFs, Milos Raonic, who is fewer than 100 points behind both Ferrer and No8 in the race, Berdych.

As well as enjoying a good run of form since reaching the semi-finals at Wimbledon, Raonic has been a finalist in Tokyo for the last two years.

He will remain wary of a potential quarter-final meeting with 2009 champion, Jo-Wilfried Tsonga, but Raonic is arguably favoured to consolidate a top-eight place ahead of Ferrer—and his hopes of becoming the first man born in the 1990s to play at the World Tour Finals.