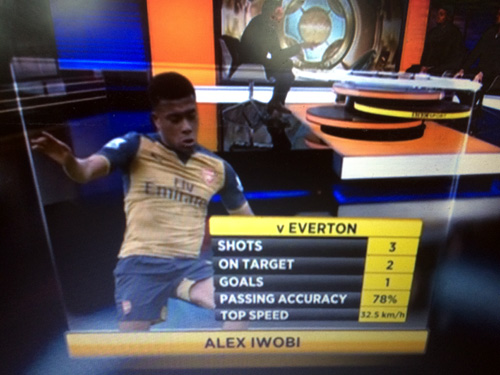 Arsenal manager Arsene Wenger selected the 19-year-old for the north London side’s 3-1 defeat by Barcelona in the second leg of their Champions League last-16 clash on Wednesday night.

The Frenchman was encouraged by Iwobi’s unfazed performance at Camp Nou and handed the young playmaker his first Premier League start for Saturday’s trip to Merseyside.

Danny Welbeck broke the deadlock in the seventh minute before Iwobi finished off a sweeping Arsenal counter-attacking move to help seal three points.

Iwobi had a further three attempts on goal against the Toffees, whilst the Nigerian playmaker’s pace on the break caused Everton a headache on Saturday afternoon.

More: Jenas: Why Iwobi impressed me

BBC Sport’s infographic above suggests that Arsenal have unearthed a gem in their youth ranks in the Premier League title run-in.

Iwobi will be hoping to retain his starting spot when Arsenal host Watford in their next Premier League game at the Emirates Stadium on 2 April.