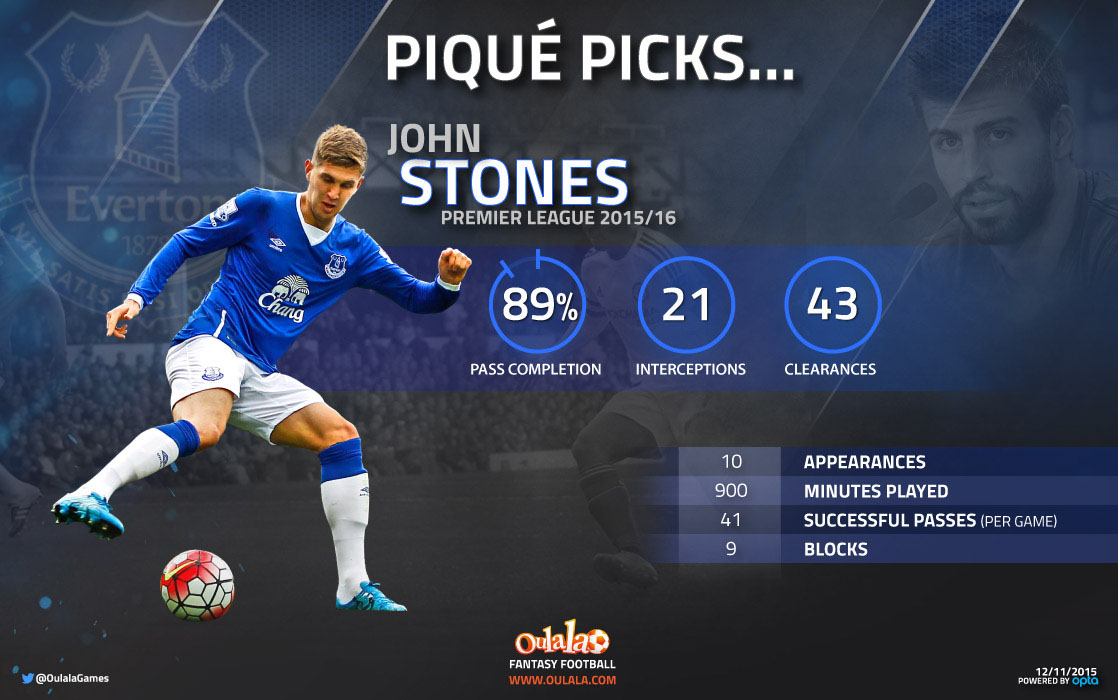 John Stones was the only Englishman to make it into Gerard Pique’s World XI team ahead of England’s friendly against Spain on Friday night.

Fantasy football game www.oulala.com have analysed the 21-year-old’s stats in the Premier League this season which further support Pique’s decision.

Pique has played alongside a long list of world-class centre-halves such as Carles Puyol, Rio Ferdinand and Sergio Ramos just to name a few. Therefore Stones’ inclusion to the side is a clear indication of how highly he rates the young Englishman.

Along with Paul Pogba, Stones is one of only two players included in the team that Pique has never played alongside. However, unlike Pogba, the Spanish international has never played against Stones. Barring any last minute injuries, the match on Friday night will be their first encounter in facing each other should they both start.

The Spaniard has likened Stones to former English international Rio Ferdinand. Pique said that being a good defender is “not just about defending or being nasty or tough” but also about “knowing how to play football, control the ball, pass and be comfortable in possession”.

Indeed as far as defenders go, Oulala’s stats show that Stones has the second highest amount of successful passes (414) in the EPL of players under the age of 23. He is pipped to the post by another young English prodigy – Eric Dier. Incidentally Dier is set to earn his first senior caps for England in their upcoming friendlies against Spain and France.

Stones boasts the highest pass completion of any player in the Everton squad that has played more than 90 minutes in the Premier League this season with 89 per cent.

Meanwhile the 21-year-old has racked up an impressive 43 clearances and 21 interceptions in 10 EPL appearances. He also has a success rate of 41 passes per game. As well as being good on the ball, Stones has shown that he is also not one to shy away from a challenge with 19 tackles and nine blocks in 10 matches.

Paul Merson: Why Chelsea will beat Man United to a top-four finish