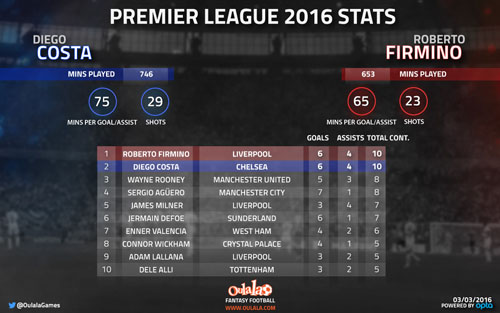 Roberto Firmino has turned a corner in his Liverpool career in 2016.

The Brazil international endured a slow start to life at Anfield following his £29m move to Liverpool from Hoffenheim last summer.

Jurgen Klopp, who has previously admitted to being a big admirer of Firmino while he was manager at Borussia Dortmund, has nurtured some good form from the Brazilian.

And Oulala’s stats show that the South American is the Premier League most-creative player in 2016 so far.

The 24-year-old playmaker has played 653 Premier League minutes in the calendar year. Remarkably, Firmino has scored a goal or made an assist every 65 minutes for Klopp’s side, which is marginally better than Chelsea striker Diego Costa.

Firmino, who has registered 23 attempts on goal, has scored six times and has made four assists to give Liverpool a fighting chance of a top-four finish.

However, the Brazilian midfielder will need to be at his creative best as Liverpool look to end a poor run of form against Palace on Sunday afternoon.

The Reds have lost three of their last four games against the Eagles in all competitions.

All stats are correct as of Saturday 5 March at 15:00 GMT