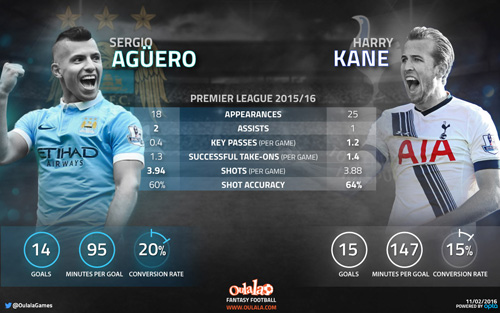 Sergio Aguero and Harry Kane should be amongst the goals on Sunday Photo: Oulala

Harry Kane will be looking to add to his four goals in four games, whilst Sergio Aguero has scored seven in his last seven matches. But who has had the better of it so far this season?

Fantasy Football game www.oulala.com have analysed both players’s stats ahead of their massive title bout at the weekend.

After failing to score in his opening six games of the season, many thought Kane was a one-season wonder and would not be able to emulate his goal-scoring prowess from the previous year.

However, the England international has been in superb form and is currently ranked as the third top scorer in the Premier League with 15 goals.

Aguero has been prone to injury this season and has subsequently played seven games less than Kane. Despite his fitness setbacks, the Argentine is still only one goal behind the Spurs forward with 14 in 18 league appearances.

As such, Aguero has a far better minutes per goal ratio (95 to 147). Had it not been for Aguero’s injuries, it is safe to assume that he would have grabbed more goals, possibly surpassing Kane, Romelu Lukaku (16) and even Jamie Vardy (18).

Kane has a higher shot accuracy at 64 per cent compared to Aguero’s 60 per cent. However, Oulala’s stats show that the City striker has been far more efficient in front of goal with a 20 per cent conversion rate to Kane’s 15 per cent. Aguero also has a marginally better shots per game average (3.94 to 3.88).

Perhaps one of the more surprising statistics is that Kane has enjoyed a slightly superior dribble success rate on a per game basis (1.4 to 1.3). Still only 22, the Spurs forward also has a far better ratio for key passes per game (1.2 to 0.4). Although Aguero has made two assists to Kane’s one.

Oulala’s stats indicate that Aguero thrives at The Etihad having scored the vast majority of his goals at home (10 from 14).

However, Kane himself is no push-over and has scored eight of his 15 league goals away from home. The numbers have been crunched and the stage is set as this potentially title-deciding encounter promises to be one full of goals.