David Ospina has been in fine form for Arsenal in recent weeks... 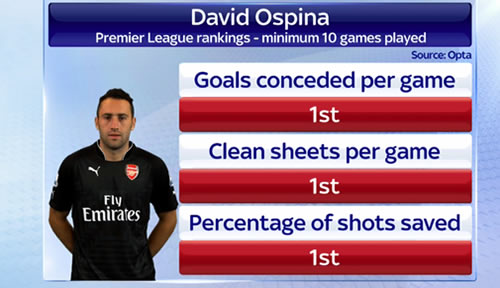 Arsenal are believed to be on the lookout for a new goalkeeper this summer following Wojciech Szczesny’s dip in form – but these stats suggest that David Ospina could well be the right man for the Gunners between the posts.

Szczesny has fallen out of favour since the turn of the year after an error-strewn display during the loss to Southampton at St Mary’s on New Year’s Day.

Arsene Wenger has put his faith in Colombia international Ospina in recent weeks, with the goalkeeper having made 13 Premier League appearances for the north London club.

And the 26-year-old has been in fine form for the Gunners. He leads the way in terms of the least number of goals conceded per game, and has also kept more clean sheets per match than any goalkeeper in the Premier League.

Ospina has also saved the highest percentage of shots than any of his Premier League rivals, suggesting that Wenger need look no further than the Colombian for his new number one.

The shot-stopper will be expecting to feature when Arsenal travel to Hull on Monday night.