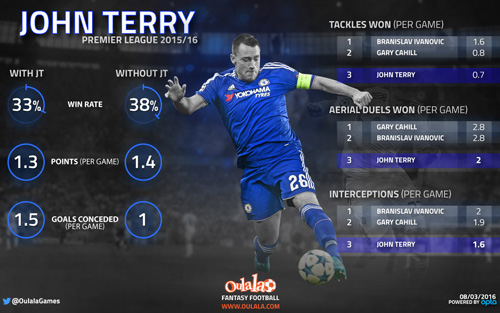 John Terry has confirmed that he will miss Chelsea’s clash against Paris Saint-Germain on Wednesday night.

The Blues skipper posted an emotional injury update on his Instagram page on Tuesday evening after the 34-year-old failed to recover from a hamstring injury.

The defending Premier League champions are looking to overturn a 2-1 deficit from the first leg in Paris after Zlatan Ibrahimovic and Edinson Cavani scored past Thibaut Courtois.

However, Oulala’s infographic shows that Chelsea have performed better defensively when Terry hasn’t been in their starting XI this season.

Chelsea have a 38 per cent win rate without their talismanic captain, while the Blues have only won 33 per cent of their games with Terry in the side.

The defending champions have earned 1.4 points per game when their skipper has been missing, which is narrowly better than with the former England defender in their line-up.

Perhaps most tellingly, Chelsea have conceded 1.5 goals per game when Terry has started in the heart of the west London side’s defence, while the English champions have leaked just a goal per game without the experience centre-half.

Oulala’s statistics show that Terry’s absence isn’t such a blow to Chelsea’s prospects of reaching the Champions League last eight.