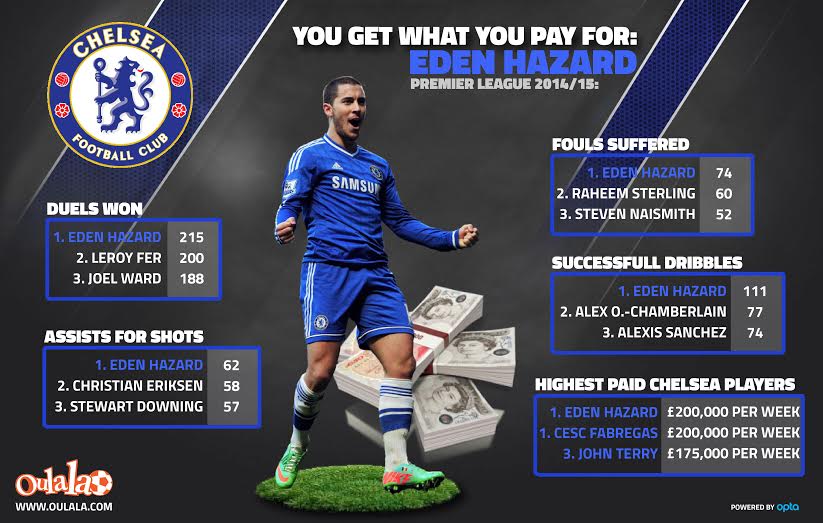 These stats prove that Eden Hazard is the Premier League's most fouled player Photo: Oulala.com

Eden Hazard is the most fouled player in the Premier League behind Raheem Sterling, statistics show.

The Chelsea playmaker, who has just signed a new five-and-a-half year deal with the Blues, has been fouled 74 times, with Liverpool’s Sterling close behind on 60. Everton striker Steven Naismith is third, having been fouled 52 times this season.

Hazard is also the third most fouled player among all footballers within the top five European leagues, the English Premier League, the Spanish La Liga, the German Bundesliga, the Italian Serie A and the French Ligue 1. The only two players currently outperforming him this season are Chievo’s Perparim Hetemaj (87) and his new team-mate Juan Cuadrado (89).

Hazard also sits on top of the most duels won (215), beating the likes of Leroy Fer (60) of Queens Park Rangers and Crystal Palace’s Joel Ward (52).

The Belgium winger – who joined Chelsea from Lille in 2012 – is by far the most prolific dribbler in the league, making 111 successful dribbles – 34 more than Arsenal’s Alex Oxlade-Chamberlain.

Hazard has also proved himself as a top team player, making 62 assists for shots to his team-mates, stats published by Opta-powered fantasy football game Oulala.com reveal.

Hazard’s reported new salary of £200,000 a week puts him only seventh in the highest paid players in the league.