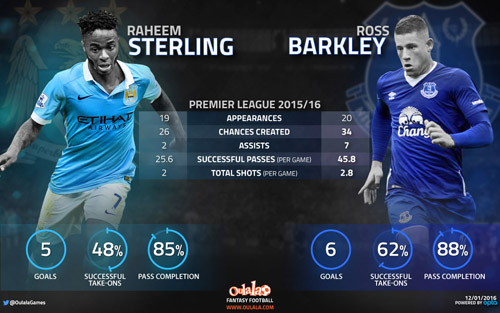 As Manchester City and Everton prepare for their second encounter in just over a week on Wednesday night, two of England’s rising stars also go head-to-head.

Sterling was an unused substitute in Manchester City’s Capital One Cup 2-1 first-leg semi-final defeat. On the other hand, Barkley featured the whole game and shined throughout putting constant pressure on City’s back four.

While both players are so far having a fine season, Oulala’s stats show that Barkley comes out on top in all seven key areas.

In the domestic league, Barkley boasts an impressive total of 34 chances created with seven of those being direct assists. Sterling also holds has an admirable 27 chances created, however the 21-year-old has only registered two assists.

The boy from Merseyside has a far greater rate of successful passes per game than Sterling (45.8 to 25.6). Their pass completion is more of a close run thing, but once again Sterling is second best (88 per cent to 85 per cent).

Oulala’s stats also show that the 22-year-old Evertonian just about edges Sterling for shots per game (2.8 to 2). Their goal count is close but Barkley comes out on top (6 to 5).

Perhaps one of the most surprising stats is Barkley’s far superior rate of successful take-ons, with there being a notable 14 per cent difference. The Jamaican-born City player has completed 48 per cent of his attempted dribbles, while Barkley has registered 62 per cent.

Everton manager Roberto Martinez recently admitted that the Toffees need to secure Champions League qualification if they hope to keep star-men such as Barkley.