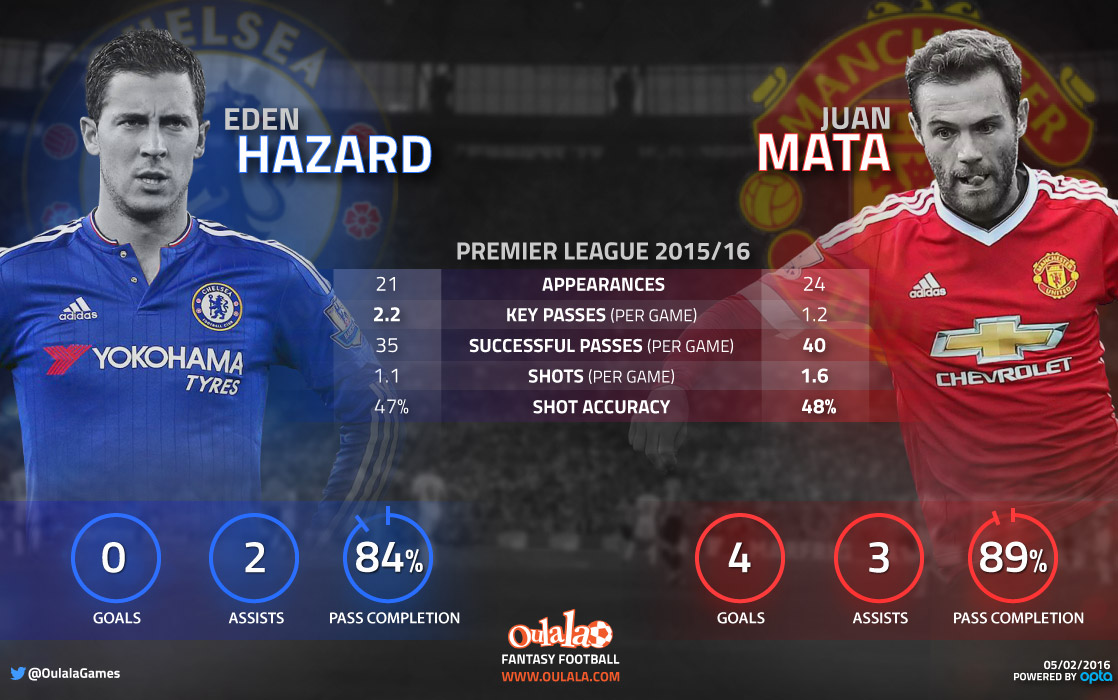 Juan Mata has been outperforming Eden Hazard in most areas this season Photo: Oulala

As Chelsea play host to Manchester United on Sunday, two players in particular will head onto the pitch with point to prove.

Eden Hazard will look to silence his critics by building up his confidence again to find the level of consistency he enjoyed last season. And Juan Mata will be hoping that his fine performance against Stoke City will earn him more starts in his preferred number 10 role.

Fantasy Football game www.oulala.com have taken a look at Mata’s stats in key areas and compared them to Chelsea man Hazard.

It’s no secret that Hazard is a mere shadow of his former self and has struggled with consistency. Although he managed to grab a goal from the penalty spot in the FA Cup game against MK Dons, he has yet to score in the league this term. In fact, his last goal in the league came in a 1-0 victory away to Crystal Palace which clinched his side the title nearly eight months ago.

In contrast, Mata has scored four goals this season. Since joining Manchester United from Chelsea in January 2014, Mata has often played out of position in a wide attacking area. However, United’s last league match against Stoke City saw the Spaniard return to his more favoured number 10 role just behind the main striker. He excelled in that position as United ran out emphatic 3-0 winners.

The Spanish playmaker has three assists this term to Hazard’s two. Having scored more goals, it comes as no surprise that Mata also has a better shots per game ratio (1.6 to 1.1). His shot accuracy is only marginally better than Hazard (48 per cent to 47 per cent).

Oulala’s stats show that in terms of successful passes, Mata has an average of five more passes per game than Hazard (40 to 35). Hazard has a pass completion rate of 84 per cent but is yet again beaten by Mata who has registered 89 per cent.

Oulala’s figures show that the only area where Hazard comes out on top is in terms of key passes per game (2.2 to 1.2).

Both players have been rumoured with exits come the summer transfer window. Despite his dip in form, Hazard has long been linked with a move to Barca’s rivals Real Madrid. The Daily Mail reports that Barcelona manager Luis Enrique is keen on signing Mata in the summer.

Will Hazard find his form again against United and can Mata earn his place as a consistent number 10?