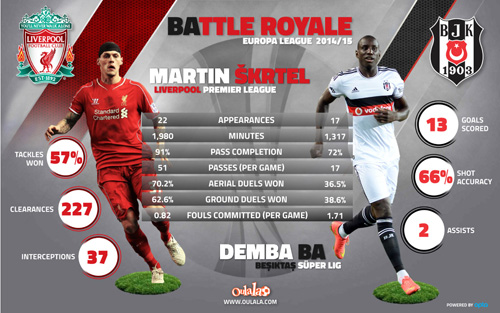 Martin Skrtel and Demba Ba face off at Anfield on Thursday Photo: oulala.com

Demba Ba has warned Liverpool that he is in the mood to break their hearts again when Beşiktaş visit Anfield in the Europa League on Thursday.

The Senegalese striker is enjoying an excellent campaign in the Turkish Super League since his move from Chelsea last summer.

However, it’s no secret that Liverpool have been on an excellent run of form of their own, especially defensively, which makes Ba’s return against the Red’s back-line that little bit more interesting.

The guys at Opta powered fantasy football game www.oulala.com have taken a closer look at Ba’s performance stats this season for his new club and compared them to those of Liverpool centre-back Martin Škrtel, the man who faces the difficult job of stopping him.

Ba has netted 13 goals in his 17 Super League appearances this season, a rate of 1 goal every 101 minutes.

The 29-year-old sits joint top of the Turkish domestic goal-scoring charts with Fernandao of Bursaspor.

Ba has enjoyed a shot accuracy of 66 per cent and has two assists to his name.

Martin Škrtel’s stats are just as impressive from a defensive point of view. The Slovak has made an impressive 227 clearances for Liverpool, the fourth most of any player in the Premier League. He has also won 57.1% of his tackles and made a total of 37 interceptions in his 22 appearances.

For head-to-head battles, there has clearly been one winner this season.

Skrtel has dominated 70.2 per cent of his aerial battles in the Premier League compared to Ba’s disappointing 36.5 per cent in the Super League.

The Liverpool defender has also won 62.6 per cent of his ground duels, again well ahead of Ba’s 38.6 per cent.

For passing Škrtel leads further with an average of 51 passes made per game, three times as many as his opponent Ba who averages 17 passes per match. Skrtel excels for pass competition too with a high rate of 91 per cent against Ba’s lesser 72 per cent.

The most shocking stat of the lot is fouls committed by each of the two players. With only 0.82 fouls per game defender, Skrtel has made less than half the number of fouls that striker Ba has who has a surprisingly high 1.71 fouls per game.

The stats suggest that the Liverpool defender has the upper hand over his opponent going into the first leg. Let battle commence.