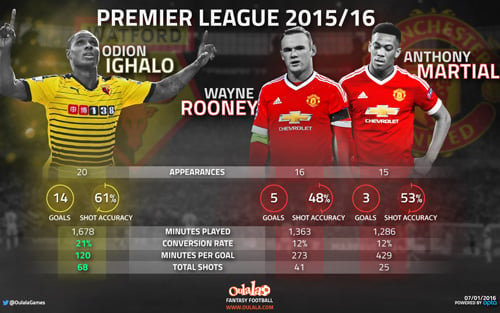 Odion Ighalo has fuelled rumours of a rumoured move to Old Trafford before the end of the January transfer window.

Speaking ahead of Watford’s FA Cup clash against Newcastle United in the third round at Vicarge Road, Ighalo said:

With Manchester United strikers Wayne Rooney and Anthony Martial struggling for goals, Ighalo would be an ideal signing for Louis van Gaal’s side.

Fantasy football game www.oulala.com’s have taken a look at the misfiring United duo and compared their stats to the in-form Ighalo.

Rooney and Martial have a combined total of eight goals between them. Ighalo, on the other hand, has scored over half of Watford’s goals this season (14 from 25).

This means that in 1,678 minutes of game-play, the Nigerian international has found the back of the net, on average, every 120 minutes. In contrast, Rooney and Martial have averaged 273 and 429 minutes per goal, respectively.

Oulala’s stats also show that Ighalo has attempted more shots than the combined total of United’s strike force. The Watford man has a total of 68 shots, whereas Rooney and Martial have 41 and 25 respectively, a total of 66.

From those 68 shots, the Nigerian international has a 21 per cent conversion rate, whereas Rooney and Martial both share a lowly 12 per cent.

Ighalo recently admitted that playing at Old Trafford has always been a “dream” of his.

With Rooney turning 31 this year, it is fair to say that he is approaching his twilight years in terms of his footballing career.

Van Gaal needs to bring in a consistent goal-scoring striker – and Ighalo could be just that.
With his prolific form and United’s lack of goals, it could be a match made in heaven.

If United fail to make a move for the Nigerian this January transfer window, then no doubt a summer transfer could be on the cards.