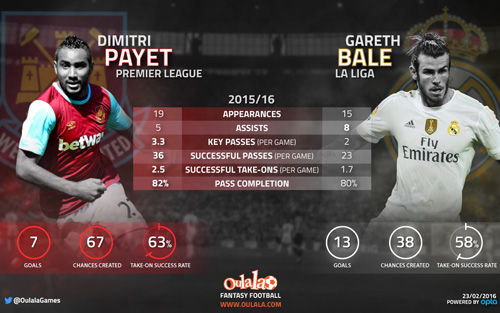 Dimitri Payet has been in stunning form for West Ham this season Photo: www.oulala.com

It’s been quite a few days for West Ham United midfielder Dimitri Payet.

Now comparisons are being drawn to another Los Blancos star, this time it’s Welshman Gareth Bale.

West Ham defender James Collins reportedly stated that he has never “played with or against anyone better”, which would include his fellow Wales international Bale.

Fantasy Football game www.oulala.com have compared one of the world’s most expensive signings to the bargain buy, Payet, to see how the two stack up against each other.

Payet cost West Ham £10.7m and is fast looking like the best buy of the season. In just 19 league appearances this season, the French international has made an impressive 67 chances. The majority of those chances have come in the form of key passes, averaging 3.3 per game.

Oulala’s stats show that this season he has created 38 chances in 15 league games. Although Bale has played four games less, that is still 29 fewer opportunities than Payet. Bale has averaged just 1.7 key passes per game. However, the Welshman has registered more assists than Payet (8 to 5).

If anything this highlights that Real Madrid have far better finishers than West Ham. If Payet played in a team with a better quality of finishing then it is safe to say that his assist tally would be much higher than it currently is.

Payet has a far better ratio of successful passes per game than Bale (36 to 23). He also just about edges Bale in terms of pass completion (82 to 80 per cent).

Oulala’s stats highlight that Payet holds a better rate of successful take-ons per game (2.5 to 1.7). At approximately 63 per cent, the stats also indicate that the 28-year-old Frenchman has also won a far greater percentage of his take-ons.

In terms of league goals, Bale is ahead with 13 to Payet’s seven. Bale has not played for Madrid in five league games due to an injury suffered in January. Payet also suffered an injury this season which kept him out for seven consecutive league games.

Since his return he has scored two league goals and made two assists in seven games.

Unlike most foreign players coming into the Premier League, Payet has quickly adapted to the pace and strength of the league and seems to fit right in.