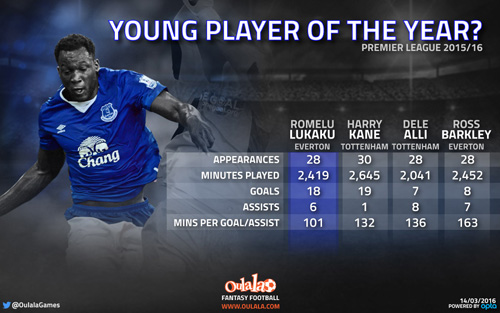 Romelu Lukaku exacted revenge on his former employers on Saturday as the Everton striker scored twice to dump Chelsea out of the FA Cup at Goodison Park.

The Belgium international’s double in Everton’s 2-0 win against the defending Premier League champions took his tally to 25 goals in 36 games in all competitions.

And the above Oulala infographic suggests that Lukaku is well-placed to strip Harry Kane of his PFA young player of the year award.

The Tottenham striker is a direct rival of Lukaku for the end-of-season prize after having scored 19 times in 30 games, which is more than Lukaku.

However, the England international has played more minutes than his Everton rivals, which means Lukaku has scored a Premier League goal every 101 minutes, while Kane has found the back of the net every 132 minutes.

The former Chelsea striker has also scored with more regularity than Spurs midfielder Dele Alli and Everton team-mate Ross Barkley, who have also been touted as contenders for the PFA award.

While you might expect Lukaku to dominate on the goals front, the Belgian has also made six assists for team-mates, which is two less than Barkley and one behind Alli.

With the visit of struggling Arsenal on Saturday, Lukaku could further underline his PFA young player of the year credentials at Goodison Park.

Harry Kane: Why my Arsenal goal isn’t my best for Tottenham