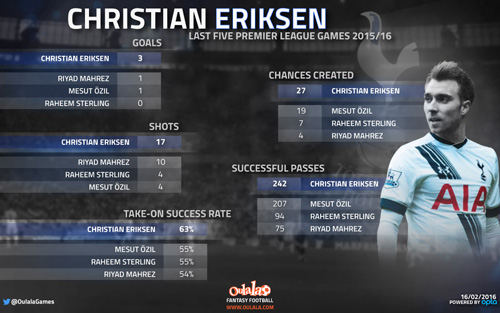 Tottenham Hotspur secured their fifth consecutive win in the Premier League with a 2-1 victory over title rivals Manchester City on Sunday.

It’s their best run of league wins since December 2011.

Many of Mauricio Pochettino’s men have been on sensational form of late. However, which player in particular has been leading the charge for the Spurs side?

Fantasy Football game www.oulala.com have taken a closer look at Christian Eriksen’s last five games for Tottenham and have compared his stats to other attacking midfielders from the Premier League’s current top four.

Since Tottenham began their five-game winning streak against Sunderland, Eriksen has created an astonishing 27 chances.

Based on current form, that is more than any other player in the Premier League, even beating the exceptional Mesut Özil by eight chances.

Of those 27 chances, two have been turned into assists. Once again this topples Özil whose assist tally has slowed, collecting just one since the turn of the year. Rather surprisingly, Riyad Mahrez has created the fewest chances (4). However the Algerian has recorded three assists.

Eriksen has scored the most goals, with three in five games. The Dane has also registered the most attempts on target (17). Collectively, Mahrez, Raheem Sterling and Özil share 18 attempts with just two goals between them.

Another area where Eriksen sits ahead of the pack is for successful passes, having recorded 242 in his last five games.

52 of those passes came in Tottenham’s 2-1 triumph against Manchester City. Despite playing the second highest number of minutes, Mahrez has made the fewest successful passes (75).

In terms of take-on success rate, once again Özil has to play second fiddle to Eriksen. The Arsenal man has a dribble success rate of 55 per cent whilst Eriksen has 63 per cent.

The win on Sunday saw Tottenham move within two points of league leaders Leicester City and are now in with a real chance of snatching their first domestic league title since 1961.

Tottenham’s next five league games include a match against arch rivals and fellow title contenders Arsenal.

A victory against the Gunners will further prove Tottenham’s credentials as title contenders.

Can Eriksen continue his rich run of form and inspire his team to victory?