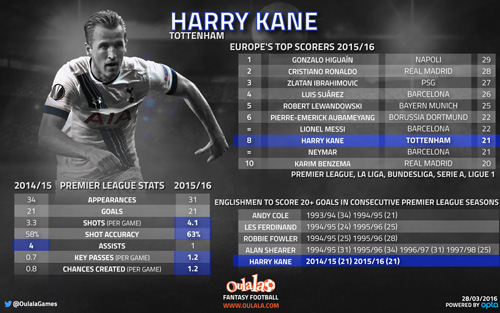 Harry Kane is in good company as the Tottenham Hotspur striker continues to amaze in the Premier League this season.

The Spurs talisman added world champions Germany to his list of scalps on Saturday night after Kane inspired England’s 3-2 comeback victory in Berlin.

Kane has scored 21 Premier League goals this season after he netted twice in a 3-0 victory over Bournemouth earlier this month.

The Tottenham forward’s opener saw him become the first Premier League player to break the 20-goal mark this term.

Kane has already matched his 21 goals from last season and the Spurs striker has another seven games to add to his tally.

The England star has also improved on his shots per game, shot accuracy, key passes per game and chances created.