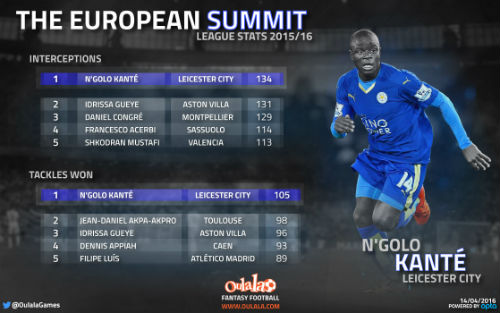 N’Golo Kante has been linked with a move to Arsenal in the summer transfer window, and if Arsene Wenger needed any further persuading, Oulala’s infographic proves that the Leicester City midfielder is outperforming Europe’s best.

The 25-year-old could cap an impressive debut season in the Premier League by winning the PFA player of year award after Kante was named on the six-man list of candidates earlier this week.

These Oulala stats highlight Kante’s impressive performances for the Premier League leaders this season after he moved to Leicester from Nantes in a £5.4m deal last summer.

Kante, who reportedly has a contract release clause of £20m, has made more interceptions than any other player in Europe after having won the ball a staggering 134 times in the Premier League campaign so far.

If that wasn’t enough to convince Wenger, the Leicester defensive midfielder has won more tackles than his European rivals – 105 to be exact – in what has been a whirlwind first season in the English top flight.