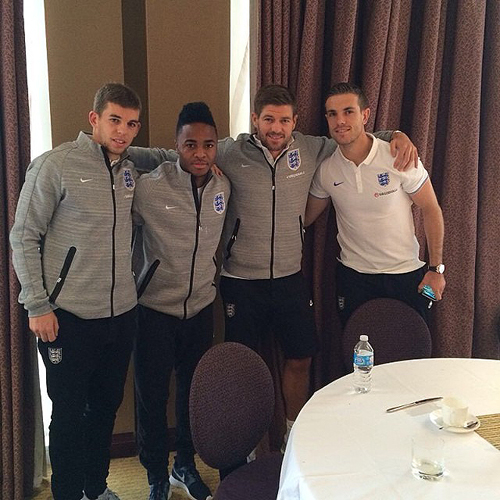 Here is the best of the social media activity from the world stars preparing for this summer’s major tournament, which starts next Thursday.

Germany forward Lukas Podolski (@Podolski10) wishes his injured team-mate Marco Reus all the best: “What a bad luck. Marco I wish you to come back soon. We will give our best for you in Brazil, too!! #getwellsoon #mr11 #Brazil2014 #poldi”

Before adding: “My bro and me ready for Brazil! #instalike #poldi #friends #dfb #Brazil2014 #team #RoadToWorldCup…”

Suspended England froward Raheem Sterling (@31sterling) will be cheering on his team-mates from the sidelines after his mid-week sending off: “Gutted can’t play in today’s game but be great to watch the lads”

Australia captain Tim Cahill (@Tim_Cahill) enjoyed coming up against a former Everton team-mate: “Great preparation leading into the start of the World Cup. Team performance was solid. Great to see my old mate #Jelavic and share memories @everton and also for him to join the @warriorfootballofficial family @tc4academy”