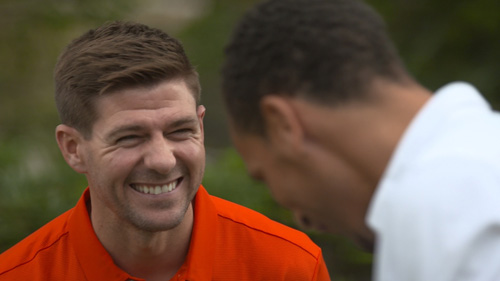 Steven Gerrard has admitted that there were times in his Liverpool career when Roy Keane and Patrick Vieira walked all over the former Reds captain.

The England centurion called time on his Premier League career in May ahead of his move to LA Galaxy after 17 years of service to his boyhood club Liverpool.

And the 35-year-old midfielder admitted in the early stages of his career, he was often dwarfed by the pair, but further down the line, enjoyed his battles with the Premier League legends.

“There was games were I’d come up against a Juventus or an Inter Milan or a Real Madrid and I’d be that fired up and id be in a moment where I thought I fancied this today. I fancy it, I feel good and I didn’t have no fear or no belief,” Gerrard told Rio Ferdinand as part of ‘Rio Meets Steven Gerrard’ which will air on BT Sport tonight at 10pm on BT Sport 1.

“For me domestically I was always striving to be in the same league as Keane and Vieira and there’s been times when they’ve walked all over me.

Gerrard has previously discussed how Vieira bossed the Liverpool legend during the 2001 FA Cup final, despite the Reds winning 2-1 thanks to Michael Owen’s late brace at Wembley.

The retired England international is set to link up with his new LA Galaxy team-mates in the coming weeks.