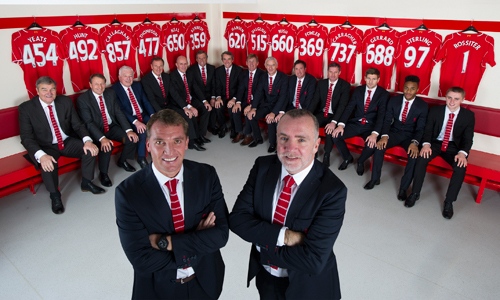 Steven Gerrard is looking forward to creating more “fantastic memories” at Anfield after Liverpool confirmed the expansion of its Main Stand.

The Reds announced that construction will begin early next year and be completed during the 2016/17 season, adding an additional 8,500 seats, taking its capacity to over 20,000 and overall Anfield capacity to around 54,000.

Liverpool captain Gerrard, who is responsible for some of Liverpool’s great moments at Anfield over the past three decades, is currently weighing up a new contract offer, with his current deal set to expire at the end of the season.

While the talismanic midfielder may not get the chance to play in front of the expanded Main Stand if he calls time on his Liverpool career before 2016, the 34-year-old welcomed the announcement.

“There have been so many unbelievable nights and memories here, it would have been a shame to leave it all and for this to have become houses or apartments,” Gerrard told Liverpool’s website.

“Now that they are going to extend the stadium, it’s going to become even bigger, better and noisier. Hopefully there are many more fantastic memories to come.”

The expanded Main Stand, which will become one of the largest all-seater stands in Europe’s top divisions, will comprise three tiers with the existing lower tier re-profiled to accommodate a widened player tunnel, new team benches, media platform and wheelchair viewing positions.

As part of the overall planning application, outline proposals to expand the Anfield Road Stand with an increased capacity of around 4,800 seats have also been approved although there is no timeframe set for this expansion.

Ian Ayre, Liverpool’s chief executive officer hailed Thursday’s announcement as “an important milestone in the history of Liverpool Football Club” after two years of hard work following the initial announcement of the council’s regeneration plan in 2012.

“It was just over two years ago that we said our preference was to stay at Anfield and here we are today announcing that the expansion is going ahead. We have made more progress in the past two years than in the last decade,” added Werner.

“Having experience of expanding Fenway Park and being through a similar and very successful project for the Red Sox, everyone at FSG is extremely proud and excited to be part of expanding Anfield Stadium.”

Jose Mourinho: Why my Chelsea won’t get complacent