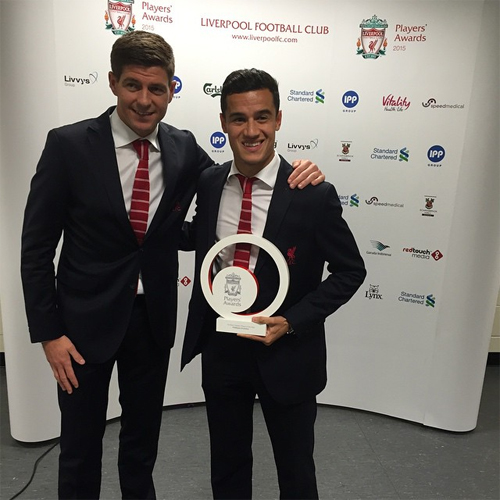 Steven Gerrard has described Philippe Coutinho as the next big thing for Liverpool.

The Brazil international has been named the players’ and fans’ player of the season after an impressive campaign for Brendan Rodgers’ men.

Coutinho, who moved to Anfield from Inter Milan in 2013, has scored five goals and has made five assists in 35 Premier League appearances this season.

Departing Liverpool captain Gerrard, who is set to join Major League Soccer outfit LA Galaxy at the end of the season, heaped praise on the Brazilian.

“I’m bored of speaking about myself,” Gerrard told Daily Mirror. “I want to pay tribute to Philippe.

“This is his night. I think he’s cleaned up on the awards and deservedly so.

“I’m privileged to share a dressing room with him. He’s the next big thing for me.

“I hope he stays here for a long time and can help the club win more trophies.”

The Liverpool captain Gerrard posted a photo with the pint-sized Brazilian on his Instagram page on Tuesday night.

Gerrard posted the above photo and wrote: “Congratulations to my little mate @phil.coutinho player of the season #magician”

Coutinho, who picked up awards at Liverpool’s end-of-season awards ceremony, signed a new long-term deal with the five-time European champions earlier this season.

The South American has scored 13 goals in 80 Premier League appearances following his switch to Liverpool from Inter Milan.