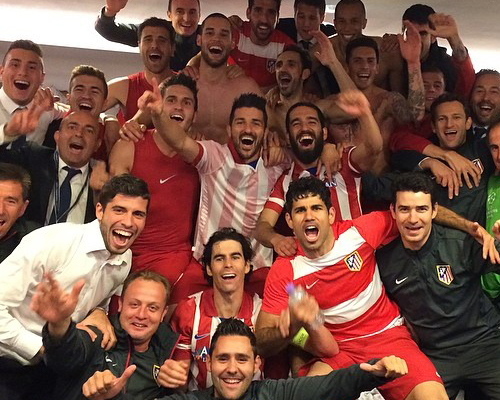 Atletico Madrid set up a Champions League final against derby rivals Real Madrid after a 3-1 victory over Chelsea at Stamford Bridge.

The Blues had scored the first goal of the semi-final meeting thanks to Fernando Torres’s strike, but Atletico sealed a comfortable second-leg win thanks to goals from Adrian Lopez, Diego Costa and Arda Turan.

Here is the best of the Twitter reaction from the professionals, past and present, in chronological order as Chelsea’s hopes of reaching a third Champions League final in six years were dashed.

Former Liverpool midfielder David Thompson ‏(@77thomo) is watching Costa get more and more wound up: “I Love Costa have done for years but he not getting a kick here! Looks like he is gona knock someone out! He will score given a chance!!”

QPR striker Charlie Austin ‏(@chazaustin9) feels there can be no arguments about the penalty: “Stonewall penalty.”

Lineker ‏(@GaryLineker) was worried by Costa’s attempts to remove the penalty spot: “Looked like he was digging a hole for himself, but Diego Costa buries it, and probably Chelsea’s hopes with it.”

Liverpool legend Jason McAteer (‏@MCATEER4) is revelling in Chelsea’s misery: “Bang – over. What goes around comes around !!!”

Former Chelsea defender Mario Melchiot ‏(@MarioMelchiot) isn’t surprised to see Atletico’s talisman make his mark: “What can I say, striker Diego Costa is deathly! Is this the man Mourinho is going to get? #mmlove #CFCLive”

Liverpool striker Luis Suarez ‏(@luis16suarez) is pleased for his compatriots: “CONGRATULATIONS to my friends Godin and Cebolla Rodriguez to reach the final. You deserve it guys, great effort!!!!”

Atletico striker David Villa (‏@Guaje7Villa) shows off the team spirit in the side: “To the final!!! Great team!!!!!”

Finally, QPR midfielder Joey Barton ‏(@Joey7Barton) praises the Atletico boss: “Huge fan of Simeone. How he has managed to get that much slick on is some feat… #themaninblack #genius”