Sunderland educate youngsters about life as a footballer 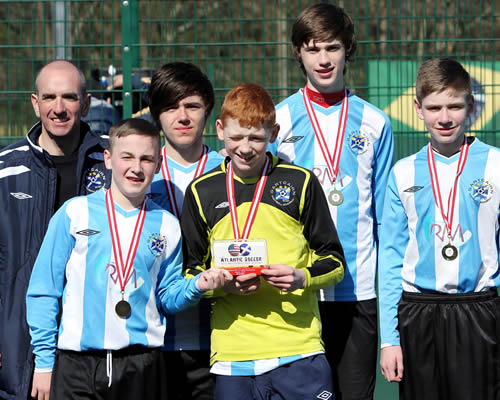 Sunderland took part in a groundbreaking partnership with Scottish schoolchildren at the weekend to help educate youngsters about life as a professional football player.

Fellow Premier League clubs Newcastle United, Manchester United and Manchester City have also signed up to the football and educational partnership that will see over 1,250 children across 15 local authorities in Scotland take part in ‘The Ultimate Premier League Experience’ in 2013.

One hundred and sixty Edinburgh school children attended a football jamboree in Sunderland at the weekend, where they locked horns with the Foundation of Light and also the Black Cats’ development squads, before enjoying a tour of the Stadium of Light and then settling down to watch the lunchtime kick-off against Manchester United.

The opportunity, which was organised by Trans-Atlantic Soccer’s Premier League Experiences, is to show Scottish school children what life as a professional footballer is really like.

John Fothergill, 32, who is a development project manager for the Foundation of Light – a charity established in 2001 by former club chairman Bob Murray CBE, said of the partnership: “Personally I came through the academy at Sunderland so I know how passionate people get about football and how much it means.

“But to me it’s not just about the football games; it’s about the experience they get through life as well.

“Just refereeing the games you can see the teamwork being developed. Going to the Premier League clubs as well, it’s probably an experience which will last a lifetime.

“They get to go to the dressing rooms and really engage with the atmosphere – there’s a special kind of tension which you can feel around the place, particularly on matchdays.

“Hopefully it gives an insight on what it takes – not just ability, but the attitude needed.

“You can be the most talented footballer in the world but if you’re going off in a huff or blaming the goalkeeper then it doesn’t make you a good player.

“It’s been like a real match-day experience for the boys as we’ve actually noticed how disciplined they are when they’re being led through the stadiums.”

Chelsea’s Cech: Other goalkeepers texted me after my Hernández save

Jose Mourinho: I have an emotional link to Didier Drogba