Sunderland’s O’Shea: Fletcher one of best strikers I’ve played with 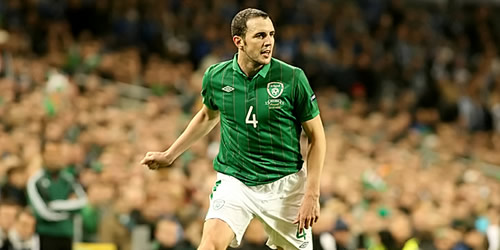 John O’Shea believes Sunderland striker Steven Fletcher is up there with the very best finishers the Republic of Ireland international has played with during his career.

The 31-year-old spent 12 years at Manchester United, with the defender playing alongside Andy Cole, Wayne Rooney and Ruud van Nistelrooy at the 19-time English champions.

Black Cats manager Martin O’Neill splashed £12m to bring Fletcher from Wolverhampton Wanderers to the Stadium of Light this summer.

The Scotland international has already scored five goals in five Premier League appearances, and O’Shea believes Fletcher will only improve further as he gets more games under his belt.

“He’s definitely up there because of the way he takes his goals. His left-foot is top class,” O’Shea told the Shields Gazette.

“I don’t want to put any more pressure on him because he has enough on his plate, but he’s definitely up there with some of the other strikers I have played with.

“He’s top class. I’d only played against Fletcher a couple of times before and he barely got a touch, but he scored two goals!

“When you see him in training you realise what a good player he is, not just as a finisher but his all-round game. He’s also getting fitter and stronger so hopefully he will benefit us even more.”

Aston Villa’s Shay Given: I was gutted to lose my first-team place